Antique advertising wine collectibles from the late 1800’s and early 1900’s include signs made from metal, wood or cardboard. Other wine collectibles of interest are postcards, magazine ads, bottle labels and tin serving trays.

Etched wine glasses and wooden crates were also utilized at the early wineries to get their name out and are sought after by collectors. The very early advertising wine collectibles prior to the national Prohibition that started in 1920 still remains highly pursued and is considered valuable. 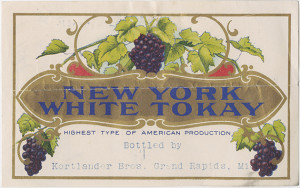 Wine companies would claim health benefits as a way to help improve their sales. Wine was advertised as a health cure for common ailments and this was especially vital during Prohibition when wine was legal only for medicinal purposes.

There was an increase in the number of customers requesting wine for their family members or for themselves during Prohibition to help with illnesses or other health issues. 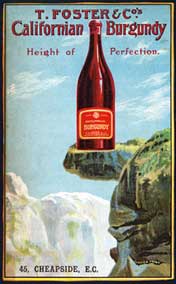 Wine has been produced in the United States since the 1830’s and the U.S. is the fourth largest wine producing country in the world. Throughout the 19th century, as immigrants from Europe’s great wine regions arrived, many initially set up wineries in New York, Ohio and Missouri.  After the westward movement and California Gold Rush, the increased population and warmer climates of California proved to be a better area to make wine. California now has 89% of the wine production in the U. S.

The national Prohibition impacted the wine industry from 1920 to 1933 because it was forbidden to make, sell or transport intoxicating liquors including wine. A loophole allowed people to make 200 gallons of non-intoxicating cider and fruit juice each year. The price for fresh grapes increased because of the high demand and a lack of refrigerated railroad cars to transport them. Some wineries survived by getting permits to make wine for medicinal purposes.