WILL THE REAL CONSUMERS BREWING COMPANY STAND UP? 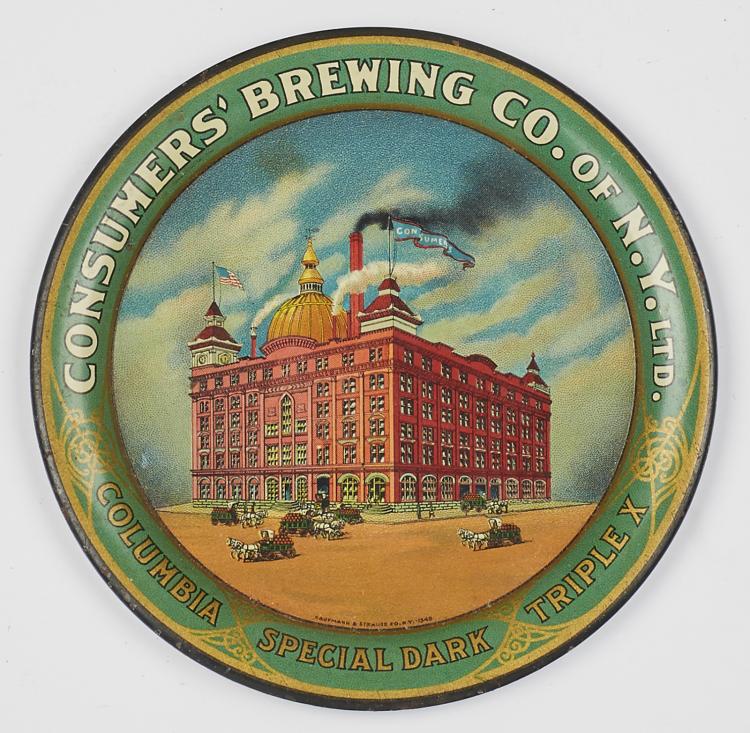 The Consumers Brewing Company of New York had a reason for calling itself “of N.Y.” in their advertising. There were simply too many breweries calling themselves the Consumers Brewing Company in the United States prior to prohibition. Featured here is a great round tin tip tray complete with the original hanging metal chain. I love this tray because they clearly featured a large factory scene in their advertising. Why would they do this? For one, the greater NYC area had quite a few breweries at this time, and I would imagine to avoid having anyone confuse their brewery with other Consumers breweries around the United States. At this time there were large Consumer Brewing Companies operating in St. Louis, MO, Newark, Ohio and also Arlington, Virginia to name just a few. I suspect there were many more prior to prohibition, albeit, not all operating at the same time most likely. This sign advertises their Columbia Extra Beer, Special Dark Beer and their Triple X brand of beer.

The Consumers Brewing Company of New York is first seen identified as being in business in 1890, and was closed by 1928, although I am sure their beer production ended with the start of prohibition years earlier. They most likely stayed in business for a few years selling malt syrup, hops, ice cream, or other non-alcoholic products, as so many breweries of the era did. The brewery was located on Avenue A between 54th and 55th streets for most of it’s business cycle, on the island of Manhattan. After prohibition ended yet another Consumers Brewing Company can be found in the greater NYC area, this time on Long Island 29-08 Northern Boulevard. I do not think this particular brewery location was tied to the original Manhattan brewery whatsoever, other than like so many others, simply hoped the “Consumers” name would inspire potential users to buy their products!