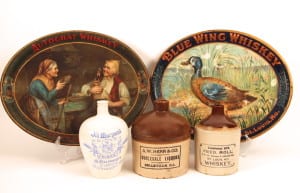 Historic whiskey collectibles are often lithographic tin signs and metal trays. Stoneware and ceramic jugs were another common way whiskey was advertised. Small companies manufactured the jugs and also sold their whiskey products to taverns and saloons. In addition, whiskey was sold to individual consumers who would take the jugs home for their own enjoyment. 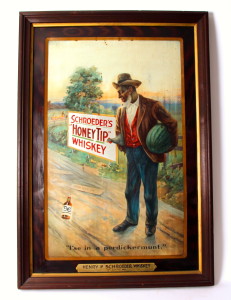 The jugs used in homes were smaller in size, ranging from one half-gallon to a full gallon. Larger jugs contained two to five gallons of whiskey and those were sold to retail establishments. Many jugs displayed a specific address on them for the business but many others just showed the city of their origin.  Some of the addresses on whiskey jugs were from the distiller’s private residence because the whiskey was made in their own home. Those jugs tend to be rare and therefore more valuable.

Saloons would occasionally provide a sample of whiskey in mini jugs with the tavern’s name on it as gifts to patrons. These mini jugs are very hard to find and highly collectible.

In the early 1800’s, whiskey was the preferred drink because water was not always safe due to shallow wells, it looked murky and tasted bad.  Since it was processed with alcohol many people thought whiskey could be healthful and invigorating.  Quite a few doctors even wrote prescriptions for whiskey to treat conditions ranging from the common cold, fever, headaches, and snake bites. 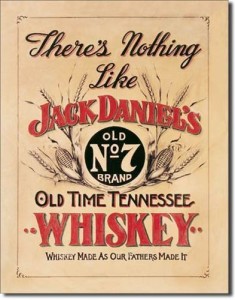 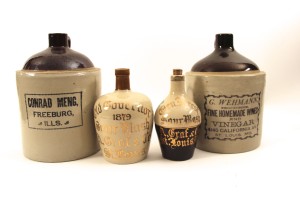 Whiskey remained the main drink in the United States until the mid-1800’s when the wave of German immigrants came over and brought with them their tradition of making beer which was cheaper to make and less costly to purchase.  While most of the whiskey manufacturers originated in the Kentucky region, there were many distillers throughout the United States.

Some of the larger whiskey manufacturer’s such as Jack Daniels had sites all over but ended up consolidating their businesses back in the Kentucky area. Jack Daniels Whiskey is known for its square bottle but before 1870 the more rare ones were the original earthen jugs and the bottles that were oval or pear-shaped and featured patriotic emblems or U.S. presidents.