WHEN KEGS WERE KING IN THE BREWING DAYS 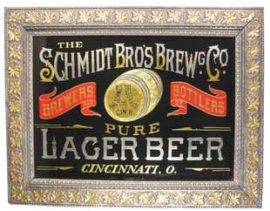 Featured is a gorgeous reverse on glass advertising sign from the Schmidt Brothers Brewery in Cincinnati, Ohio.  This ROG style sign was made around 1900.   Lager beer was a commonly made and also a huge selling beer in many cities, especially where the German immigrants had settled.   Cincinnati was one of those cities, known as part of the German triangle, which both Milwaukee and St. Louis were the other cities in the triangle, full of German speaking immigrants.  A couple of the largest selling brewers in the world made lager beer and were based in those cities, those being Anheuser-Busch and their Budweiser lager beer brand, and the Joseph Schlitz Brewery with their namesake Schlitz beer.  The Schmidt Brothers Brewery was located at 135-138 East McMicken Avenue in the Over-The-Rhine section of Cincinnati.   The brewery buildings still exist today at this site.

As shown in the sign, the use of large wooden beer kegs or casks as they were sometimes called was often used in brewery advertising before prohibition.  Could there be a more recognizable piece of the brewing industry to garner attention than a wood keg?   I suspect the breweries at this time wanted their products to be seen, and hence, a lot of breweries used wood kegs in their advertising.   By doing so, they were likely able to pull the casual viewer of signage to their brand quicker, setting their advertising apart from a grouping of signs for many other products being sold in a locale.  Today breweries no longer use wood kegs for storage or shipping, as everything went to steel kegs to allow longer storage times and less susceptibility to bacterial growth which often occurred inside the wood vats.