WHEN HAND HELD BRUSHES WERE ALL THE RAGE! 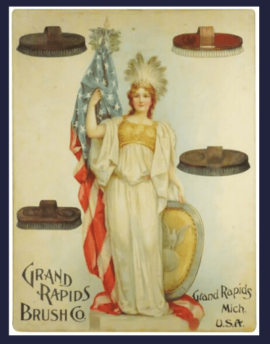 Featured is a beautiful paper lithograph from the Grand Rapids Brush Co., based in Grand Rapids, MI about the time this print was made in 1900.   Featured cleverly in the patriotic design are hand held brushes of all sorts.   In the center of the brushes is what I call Lady Liberty, the woman who was patriotically used in many lithos of the day, especially right after the Spanish American War had ended in 1898.

The Grand Rapids Brush Company like so many other companies eventually lost business over time, due to the lessened need of men shining shoes in spots all across America as they did in the early 1900’s. Today it is hard to find the lost art, but occasionally you will see these guys in airports across the United States, and in finer hotels.  An art form lost simply due to people not keeping shoes as long as they used too, due to the fact shoe prices have went down with so many of them being made in foreign countries with cheaper labor.