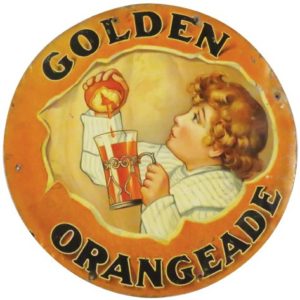 The Golden Orangeade brand marketing campaign was not too hard to decide on. Why not use an orange shaped design for our signs to sell the orange flavored product? One thing is certain…the consumer easily recognized the product being sold from a distance with the distinctive shape and use of the color orange, similar in style to an orange peel.

This particular rare sign also incorporated a small child actually squeezing the orange juice out of an orange and filling their cup with the orange flavored juice. Sometimes marketing a product can be as easy as using the product image itself to help sell to the consumer. The Golden Orangeade brand was also marketed as the “Best Soft Drink Proposition ever Presented” and soda fountain operators could “Write for particulars to learn about the profits made by selling this brand.” 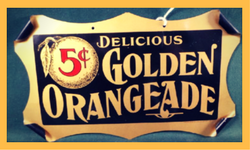 The Golden Orangeade brand was manufactured by the J. Hungerford Smith Company based in Rochester, N.Y. The company was nationally known for their True Fruit brands of syrups used in soda fountains nationwide. Besides Golden Orangeade, they were also well known for their Royal Purple Grape Drink and their Root Beer soda, which later became the formulation for A&W Root Beer.

The J. Hungerford Smith Company was located on North Goodman Street and was founded in 1879. Today the old soda factory is used as an artisan center and other small businesses.