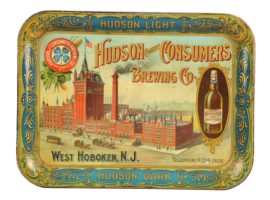 I have always enjoyed the color and beautiful graphics from this century old pre-prohibition era serving tray put out by the Hudson County Brewing Company in West Hoboken, N.J.   In the shadow of New York City, and with the major competition from Gottfried Krueger in Newark, George Ehret in NYC, and others, the Hudson County Consumers Brewery rose to great fame and fortune.   Their success was proudly illustrated by the immense factory scene featured on this pre-pro era ca. 1910 era serving tray.

The Hudson County Consumers Brewing Company started selling beer in 1901.   Obviously given the immense size of the factory just a few short years later, sales were phenomenal.  The plant shown here was located at 481-515 Summit Avenue, which was once West Hoboken, but is now known as Union City, N.J. Before prohibition ten different breweries operated in the cities of Hoboken and West Hoboken. Unfortunately like so many other breweries of this era, the factory closed in 1920 and never reopened when the great experiment ended in 1933.  Torn down in 1935, the Roosevelt Stadium complex sits where the brewery once stood.