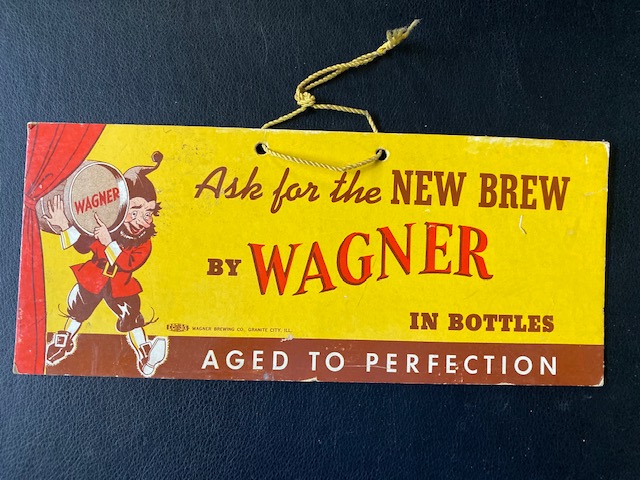 The Wagner Brewing Company formerly in Granite City, Illinois used a gnome or elf like man to carry their New Brew product to you. This particular brand New Brew was the breweries attempt to revive their beer brand once prohibition ended. Why the elf like creature is anyone’s guess. However, multiple breweries used these guys to help sell their brand images. One brewery right down the road from the Granite City Brewery was the Mound City Brewery in New Athens, Illinois, which also used the same figure in their advertising at that time also. This particular cardboard sign has a string on it to allow the sign to be hung on the tavern wall.

The Wagner Brewery was originally started in the city of St. Louis, MO, however, seeing the burgeoning industrial town of Granite City just across the river, the owners opened up a brewery at the Illinois site before prohibition. Once prohibition ended, the brewery tried to revive the brand, and was able to keep the business running until around 1940 when the larger breweries eventually ran them out of business, ending the long running era for the Wagner family brewery.