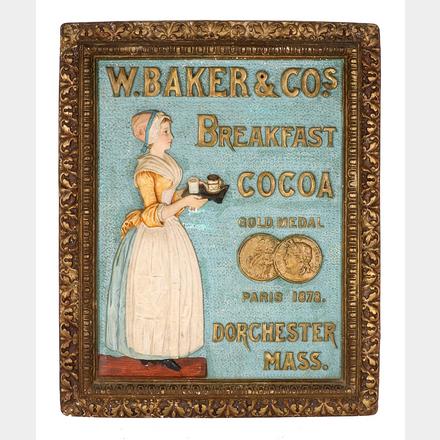 The W. H. Baker Flour Company was very proud of their Gold Medal Award in 1878 at the Paris Exposition as illustrated in this early plaster sign. Of course, why not? Interestingly I have found that these early Expos and Worlds Fair events often had multiple winners of medals given at the same event, and for the same level. How could two companies win Gold Medals which appeared to be in the same category? I still do not have an explanation for this reality, other than to suspect the awards may have been based on subcategories, or even for payback for their dollar sponsorship of the events? I hope to learn more on this in the future, but for now, this maid truly illustrates the purity of the W.H. Baker companies flour and breakfast cocoa products.

The W. H. Baker Company was based in Dorchester, Massachusetts, which is just outside of Boston. Founded in 1780 by Walter Baker, the company was eventually bought in 1896 by the Forbes Syndicate. In the last forty years Kraft eventually bought the brand and currently owns it.