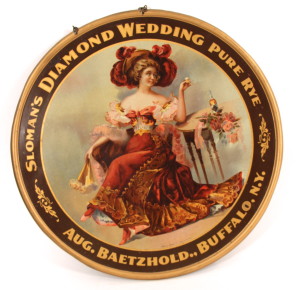 A beautiful Victorian woman is featured on this antique advertising tin sign for Sloman’s Diamond Wedding Pure Rye Whiskey, circa 1910. The whiskey was produced by August Baetzhold in Buffalo, New York. I think it’s interesting how many of the early distilleries and breweries highlighted beautiful woman in their advertising. It was apparently targeting the men who were the main liquor drinkers before prohibition. 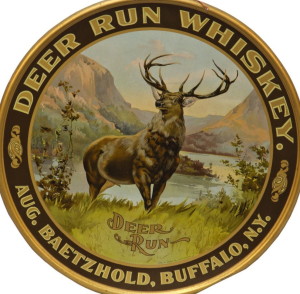 In this12-inch round self-framed tin sign, the woman is wearing a long red formal dress and large hat.  She is sipping the Diamond Wedding brand whiskey from a shot glass with a bottle of it on the table next to her. This tin sign has a small gold chain on the top to hang the sign from. The business owner, August Baetzhold had another version of this sign made with a similar shape and size.

However, in the second version of the tin sign, instead of the woman it featured a deer to promote his Deer Run Whiskey brand. Both of these self-framed tin signs were made by the Chas. Shonk Lithographic Company in Chicago, Illinois, circa 1910.

August Baetzhold started his whiskey business in 1862 on Main Street in the Cold Spring area of Buffalo, New York. A few years later when his business grew he moved to Ellicott Street. He finally located to 567-571 Michigan Street at the corner of Cypress where they remained for the  majority of the business’s life. The side of his whiskey factory boldly stated  “Rectifier of Spirits” and ‘Wholesale Wines and Liquors”.

Stoneware collectors can find many varieties of Baetzhold’s advertising whiskey jugs in many styles and sizes including salt glazed and fire kilned jugs. These jugs would have contained their whiskey brands including Deer Run, Gold Coin, Santa Fe and Sloman’s Diamond Wedding Pure Rye brands.

It is fairly easy to date the age of this company’s advertising items as the name changed three times over their 56 year history.   The original name was August Baetzhold Company. The business later changed its name to August Baetzhold & Sons. Eventually, the company was called August Baetzhold Sons. after their father died in 1911.

Unfortunately, with the beginning of Prohibition in 1919, it ended the Baetzhold business during the height of their success.