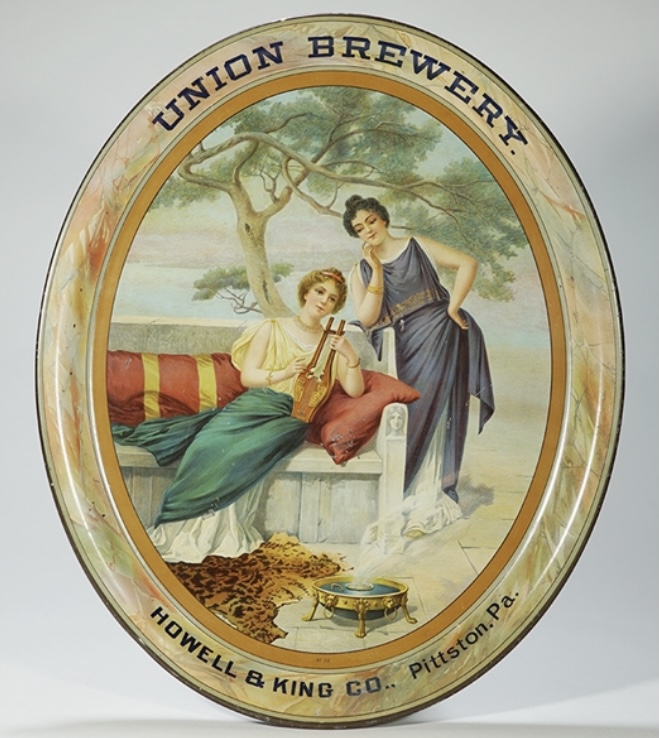 The Union Brewery owned by Howell and King produced a neat stock tray featured here to help sell their breweries products during the pre-prohibition era. This particular stock tray image was used by many breweries prior to prohibition starting, and was one of the more popular images of that era for brewing companies. Interestingly, many of the trays from this era have wholesalers names attached to the rim of the tray, and the wholesaler’s city broadly displayed along with the actual brewery itself. Companies like Anheuser Busch did this with local distributors in St Charles, Missouri and Des Moines, IA as for example. I would suspect the breweries may have paid for the trays, simply asking their larger distributors to push the trays in their respective markets, therefore, gaining more sales with more advertising of their product. This particular image on serving trays essentially ended around 1920.

Originally founded by Rand, Howell, and King, the brewery opened shortly after the end of the Civil War in 1868. The brewery remained open until 1920 when prohibition ended their operations. However, the owners restarted the brewery in 1935 and remained open until 1939, when larger competitors finally pushed them out of business for good. Their flagship Perfection brand of beer was advertised heavily in the 1930’s, but ultimately did not stick with the consumer.