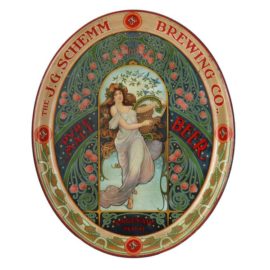 This beautiful serving tray from the J. G. Schemm Brewery in Saginaw, MI is one of the prettier pre-prohibition serving trays I have seen in a long time.  The colors are simply unique and the image of what appears almost to emulate a stained glass window in the center differentiates the tray from others.   The woman is playing a harp musical instrument in the scene.  I have seen this tray a few times, and each time it catches my attention unlike it’s contemporary counterparts.   I do not believe this tray is a stock tray, but I think it is unique to this brewery alone.  Pre-Prohibition era, circa 1905-1910 most likely.

The J. G. Schemm Brewery was located in the 900 block of North Hamilton Street, between Holland and Miller Streets at one time.   John Schemm started the brewery in the 1860’s and was originally a partner with Christian Grueler before eventually buying him out and owning the brewery by himself.  The brewery operated in Saginaw until the start of prohibition in 1919.  However, even after prohibition started like so many other breweries they sold non-alcoholic drinks such as Near Beer to keep the operations afloat as long as they could.   The business was not able to restart after prohibition ended in the early 1930’s, hence, ending the family business once and for all.