St. Louis Post-Dispatch features writer, Valerie Schremp Hawn, interviewed The Antique Advertising Expert, Randy Huetsch, for an article regarding his historical perspective of the Cook’s Imperial Champagne which was made by the American Wine Company, St. Louis, MO. The American Wine Company was formally located inside a stone building, that housed an underground cellar, which is now located at the present day Vashon High School at Cass and Garrison Avenues in North St. Louis. #stlstuff 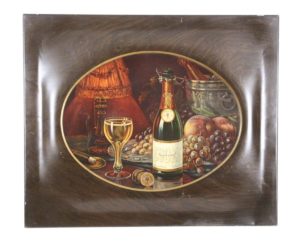 For the most discerning of palates, only a bottle of Cook’s Imperial Champagne aged in cellars below the streets of north St. Louis would do.

Randy Huetsch of Chesterfield knows Cook’s was big. He works in health care insurance and runs an antique advertising appraisal business, called the Antique Advertising Expert, on the side.

He has about eight Cook’s items in his extensive antique collection, and the Cook’s signs came from all over the country, Buffalo, N.Y., to San Francisco. View the Antique Advertising Expert’s Wine Collectibles.

“The stuff was literally sold everywhere,” he said. “They were the No. 1 selling Champagne. It was not as big as wine, but damn close to it.” 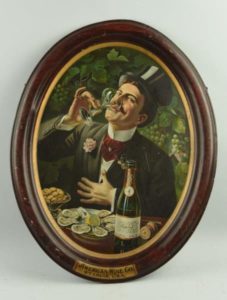 Cook’s was made by the American Wine Co., located inside a castle-like stone building and vast network of underground cellars at what’s now Vashon High School at Cass and Garrison avenues. Chicago politician Isaac Cook established the company in 1859 and put his own name on the Champagne, made mostly with California grapes (these days, most wines labeled Champagne must come from grapes grown in the Champagne region of France).

Advertising pieces and ads show a life well-lived with Cook’s: a lobster and two bottles of Champagne resting on a silver tray; a dapper gentleman in a top hat eating oysters with a bottle of Cook’s; and an ad promising that Cook’s was easier on the stomach.

“In atonic dyspepsia, vomiting, and in convalescence from acute diseases, Cook’s Imperial Champagne is held in high esteem by physicians,” reads one ad in a medical journal.

Companies often played to the medical community, especially during Prohibition, when wine was only legal for medicinal reasons, Huetsch said. Even then, those who just wanted to drink it found their ways.

“It has been common talk in circles where liquor is consumed that ‘Cook’s Imperial Champagne’ might be secured in copious lots and the demand has been firm with the supply even firmer,” said an Oct. 2, 1925, story in the Post-Dispatch.

The supply likely came from a makeshift plant in an old inn, near what’s now Highway 141. 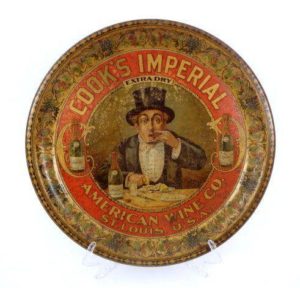 “Paul K. Gill, a prohibition agent, recently detected the odor of mash struggling for supremacy over gasoline fumes as his roadster chugged past Caruso’s Inn on Clayton Road, two miles west of Altheim,” continued the story.

The supply likely came from a makeshift plant in an old inn, near what’s now Highway 141.

“Paul K. Gill, a prohibition agent, recently detected the odor of mash struggling for supremacy over gasoline fumes as his roadster chugged past Caruso’s Inn on Clayton Road, two miles west of Altheim,” continued the story.

Officials found 453 quart bottles of the finished product, 215 gallons in copper vats, and 800 gallons of “mash” in a barn. They destroyed it all and arrested seven men and one woman.

But at the end of Prohibition, bottlers had the legit stuff ready to go. Under the headline “Ready for Uncorking of Repeal,” in the Dec. 3, 1933, edition of the paper, a photograph showed workers taking crates of Champagne and placing them on a cart. The caption said they packed 2,000 cases and readied them to ship to 10 states.