SPOTTING A FAKE SIGN…CLUES FROM THE EXPERT

Fake Signs being Passed off as Authentic

A sad but realistic trend in the advertising collectibles hobby is fake signs being introduced into the market by some unscrupulous dealers. The cause of this is simple: antique signs bring extraordinary prices created by the strong demand from a very limited supply of antique items to their collections.

Starting 20-30 years ago, retail establishments were bringing real nostalgia to their walls, including Chili’s, Cracker Barrel and other chain restaurants.  However, now there are many are fake signs. 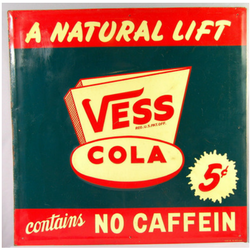 While most non-original signs are easy to spot by long time collectors, many novice collectors are getting burned when they buy a non- authentic item and it’s not as valuable.

I would like to provide some insightful tips to help avoid getting “stung” by dishonest dealers, many which are selling on eBay, or setting up at flea markets and smaller venues.

More recently, some companies in India and the Philippines are now producing porcelain signs whose quality at first glance may appear better than the first reproduced signs made 20 years ago.

However, because these signs are not original, with time many of these  non-original signs are starting to degrade. Many fake enamel porcelain and tin signs will eventually seep a powdery residue on the surface, making the sign basically worthless. There are other telltale ways to help buyers better understand what they are buying and the authenticity of the items.

At First Glance, Reproduced Signs May Appear Better – But they are Not! 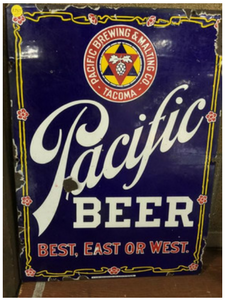 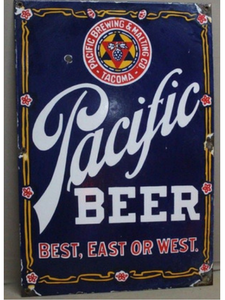 Some hints are below, to compare the original Pacific Beer sign to the fake one shown above.

1 Porcelain sign chips – Most faked signs produced today are having intentional chips put on the edges of the signs primarily. In comparison, most original porcelain signs will have chipping typically throughout the sign. If you look closely at the authentic chipping you should see layered enamel on the edge of the chips. The fake signs do not have layers as they are simply computer generated, and as such, the fake signs never had their enamel baked on layer by layer like their original counterparts.
2 Rust spots – The fake signs often have a rusty residue which is more of a orange-red color vs. the original signs having more of a black-brown rust color. This is also a result of the computer process not being able to emulate the original production techniques.
3 Rivets – Look for rivets which look old, tarnished, and perhaps rusty. Many of the newer fake signs have rivets which look like they were produced recently.
4 Mounting Holes – One of the more commonly faked signs today are the door pushes which were originally hung on old grocery and general stores. These smaller signs were designed to allow customers to push on them to gain entrance into the store. This was creative and avoided customers repeatedly pushing their hands into the screen causing damage to the screen itself. Many of the fake door pushes do not have holes in them, but some do. If you do not see holes in a door push sign, it is generally fake. Why would a company produce a sign to be hung on a door with no mounting holes on the sign? Many of these smaller signs are porcelain and are simply images taken from matchbook covers of the era and are being computer generated.
5 Natural Fading Process – Most porcelain signs had thicker paint on the areas except on the lettering which used thinner paints. Accordingly, the paint from the lettering areas typically fades a bit faster for this reason. Typically, an older sign will not fade evenly either, and red colors tend to fade first. So, if you see the red color as shiny or shinier than the other colors, and if it is on the lettering in particular, use some caution.
6 Materials – One easy way to determine if a sign is authentic and old is to use a magnet on the metal. If it is original, the magnet will stick to the sign since it is steel. If the magnet does not stick, the sign is probably baked on aluminum. Signs from the 1950s and before never used aluminum in their composition, so this is an easy way to determine if a sign is old or not. Many eBay sellers call signs “porcelain” when they are simply newer baked on enamel over aluminum signs.
7 Wood Signs – When you encounter a wood sign you will realize very quickly no two wooden signs are exact. Each one was custom made, and as such, the letters will be a bit different in length, curling of the letter, or shape. Simply said, while the artist from the early days were good, even they did not produce the exact same scripts from sign to sign since they were handmade.
8 Ebay Sellers Use of Vague Language – Some of the notorious sellers on eBay will use verbiage such as “Vintage” or “Authentic” or “Old” when they are not old. Ask the seller to see the back of the sign; this will help buyers in seeing the color and the aging of the sign. If it doesn’t look right, it probably isn’t. Unscrupulous dealers on eBay oftentimes do not include pictures of the backside of signs hoping to avoid sellers realizing the items are not original. My advice, always ask for a backside photo, and carefully read the description to see if the sellers are using vague language around the age of the item.

I hope this information is helpful to many collectors who are interested in historical advertising. Please keep in mind most dealers on eBay and other places are great and in the business of sharing in the fun, building their hobbies and making a few dollars on items they pick up from time to time.

The few bad apples in the hobby are becoming well known, and are even getting called out on social network.  With time, even those sellers will have a difficult time selling their fakes. Let’s hope that day comes sooner than later for those dishonest dealers.