Antique advertising soda collectibles are some of the most sought-after advertising items today. Some collectors seek out antique soda memorabilia by brand. Others are interested in the variety of soda advertising that was found in the old general grocery stores, diners and service stations.

Coca-Cola is the king of all soda pop brands and one of the most collected because of its abundance of antique advertising memorabilia.  Early and rare pieces have set record-breaking prices in the collecting world.  In 1891, Coca-Cola began producing at least a calendar a year, often created by famous artists such as Norman Rockwell and Haddon Sundblom. Tin serving trays and tip trays with beautiful, colorful artwork were also produced in a wide variety and proved to be one of their most long-lasting advertising specialty items ever.

Antique advertising soda collectibles include soda bottles, syrup dispensers, signs, trays, clocks, thermometers, door pushes, glasses, coolers, crates, menu boards, radios, openers, postcards and much more. Rare memorabilia from popular brands and companies that made soda for a short time can generate the most value. Overall. the worth of the soda relics depend on condition, the brand, location, date, and how rare and unique it is. 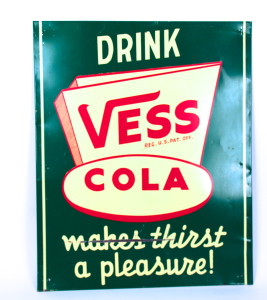 Signs were the best form of advertising for soda companies from the late 1930’s through the 1950’s.  Most signs were placed inside or outside of the neighborhood grocery stores and by roadsides to help promote a particular brand.  Soda signs were also put on soda coolers, menu boards and company trucks. Signs were made out of different materials including porcelain enamel, tin, cardboard, wood and glass mounted on wood.

Many of the original classic signs claimed their soda was good for your health or had unique slogans such as “Enjoy Vess – Billion Bubble Beverages” or “Bevo – The All-Year-Round Soft Drink”. Other early messages were created to influence people to buy soda by the case to generate more sales.

Later on, soda ads were more simple and had just their name and logo, or shorter messages such as “Drink Coca-Cola” and “Have a Pepsi”.

Soda trays are another from of advertising and were used to serve soft drinks at soda fountains, diners and neighborhood centers. Most soda trays were circular, rectangular or oval and usually around 10 to 14 inches in size. All trays had a curled edge for the intent of keeping soda from spilling off the tray. The trays depicted colorful images of the soda company’s logo and product, or other artwork such as buildings, women and fashion, and animals. 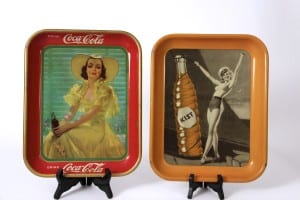 The process of printing on trays evolved over the years. Initially, it was very involved  with up to twenty separate press runs being used to produce all the colors and tones. Later, a more efficient process of lithography was implemented enabling less color plates and drying time.

Smaller trays known as ‘tip” or “change” trays were about 3-4 inches in diameter. These trays were not large enough to serve soda or other beverages. The smaller trays were intended to return a customer’s change or be used for patron’s tips for the servers. They also became useful as coasters or ashtrays. Soda tip trays are not as commonly found as the brewery tip trays. However, both the soda serving trays and tip trays proved to be great forms of advertising that are highly coveted collectibles today.

Relic soda bottles are in high demand to collectors and rare ones can value thousands of dollars. Soft drinks were first commercially bottled in the United States in the 1830’s. Soda bottles were made in many sizes, shapes, colors and textures.

Some soda pop bottles had straight forms and others were created with a contour like a torpedo, or curvy such as Coca-Cola’s hobble skirt design. In the early 1900’s most of the soft drinks had embossments on the bottles to show the manufacturer’s name and city.

Soda bottles also had other engravings or logos to differentiate their brand. The earliest of soda bottles were hand blown glass made by craftsman skilled in bottle making. Initially, the glass bottles were made with colors of brown, blue or green because it was less expensive to produce. Eventually soda bottles were primarily made with clear glass.

Soda bottles differed by the style of the lip of the bottle and its base. From 1830 – 1870, adding an extra piece of hot glass to the top after the bottle was out of its mold created the lips of the bottles. After 1870, a lipping tool assisted in making a more precise lip and also formed light rows of ring markings that are still evident on the top of these bottles today. The bases of the bottles also vary and can help predict it’s age. Early bottles before 1860 can display a “pontil” mark that showed a rough area on the base or an “open pontil” that created a concave formation on the bottom. The mark was created when an iron “punty rod” broke while be used to keep a hot soda bottle in place while the lip was still being molded. When looking at the bottle with a pontil, the residue from the iron punty rod can often still be seen. Earlier bottles also had porcelain stoppers held by a wire bail. Eventually tops evolved into crown tops with a metal bottle cap that were easier to produce and preserved the soda better.

Soda carriers that were used to transport cases of soda are also of interest to collectors. The old wooden crates typically held a dozen or more bottles. The original crates had a black stencil on the wood and eventually progressed into a more appealing painted case for increased brand recognition with the soda company’s name or logo.

The use of wooden crates were eventually replaced by metal and cardboard carriers because they were lighter and less expensive to make. By the late 1960’s, most of the metal and cardboard carriers were intended for six-packs. Many of the aluminum carriers came with wood grips or were held by wire handles. The hardest to find wooden soda crates and carrying cases are the smaller regional brands and are considered valuable.

Soda fountain syrup dispensers were used in the old soda fountain shops and drug stores during the 1910’s to 1940’s. These dispensers are highly sought after soda collectibles because they are hard to find.  Since there are not that many styles, these dispensers typically bring more money than any other soda collectibles. Syrup dispensers were made of stoneware crockery, fine porcelain, frosted or painted glass, or metal, and advertised the brand on the side with the company logo or catchy slogan.

Soda fountain syrup manufactures would often give the soda syrup dispensers away free to neighborhood pharmacies as a way to advertise their brand as long as the drug stores bought enough of the soda syrup. Syrup manufacturers such as Ward made the famous syrups for Orange Crush, Lemon Crush and Lime Crush. Ward’s dispensers were shaped like the fruit drink which was being dispensed – oranges, lemons and limes.

Early on, drug stores mixed the flavored syrups and carbonated water with bitter tasting drugs and claimed they were cure-alls for everything from the common cold to pneumonia. Later, syrup manufactures no longer included drugs in the drinks but made strong health claims such as Marrowfood’s syrup “Makes Rich Red Blood.”

Door pushes were found in the early 1900’s in the old neighborhood general stores where groceries were sold and one of the most popular advertisers on door pushes were soda pop companies. Door pushes were mostly made out of tin or porcelain. Door pushes held up well when people went in and out of the country stores and diners. It was an inexpensive way to remind a patron of their product. Most door pushes were vertically rectangular and often had crimped edges on the ends of the sign and were designed to fit on a doorframe.