SIDNEY DILLON CIGAR WAS NAMED AFTER A RECORD SETTING HORSE! 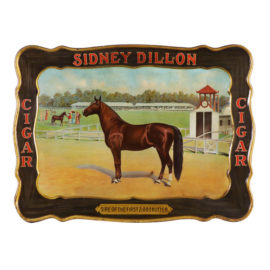 The Sidney Dillon brand of cigars produced an amazing self-framed tin sign, shown here, to commemorate the famous horse’s record accomplishment.   Apparently Sidney Dillon sired the first trotter horse who was able to break the then track record of finishing in less than two minutes.  The J.B. Moos Cigar Manufacturing Company based in Cincinnati, Ohio decided to name a cigar after the horse, and as a result, antique advertising collectors were left with not only a great tobacco related collectible, but also one that crosses over into the sporting world or horse racing genre of hobbyist.

The J. B. Moos Company was based in Cincinnati, OH at 511 Sycamore Street.   The company was in business as early as the 1890 era and remained in business through the 1920’s or even longer.   The Sidney Dillon horse success of being able to sire the first trotter which broke the two minute track barrier allowed the company to capitalize on the fact the horse was idolized by many who followed the sport at that time.