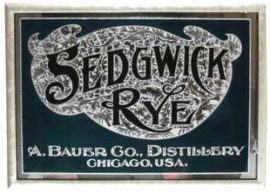 Featured is a beautiful glass chipped sign from the A. Bauer & Company Distillery Agency, formerly located in Chicago, IL.   This reverse on glass designed advertisement advertises the companies Sedgwick Rye brand.    The sign could have been made by the Rawson and Evans Sign Company, , the P. Pause Company, Atlas Sign, or the Western Sand Blast Company of Chicago, all based in Chicago from the late 1800’s until the early 20th century, except for Atlas which remains in business even today.  Both the Rawson and Evans and Western Sand Blast Sign companies were notorious for their usage of black and white coloring in their chipped glass designs.  Unfortunately today the art of making chipped glass signs is almost unheard of, as the process is simply too time consuming and expensive.   There are however a few companies making them still, albeit very few signs whatsoever due to the expense of producing them today.  Either way, this most likely a great pre-prohibition era advertisement for one of their brands of rye whiskey.  However, it is possible this is a newer sign based on the coloring which is not reflective of the early versions, but could be from a find a few years back where not every sign was finalized in color when they started working on them again after laying dormant for almost 100 years.

The A. Bauer & Company Distillery was started in Chicago in 1893.   The company stayed in business until the start of prohibition, which occurred in 1918.   The Company was located at 158 Huron Street, but later moved to 227-233 Huron Street before it went out of business.   Some of their other brands besides the Sedgwick Rye offering were the Anchor Brand Peppermint Schnapps, Belle of Kentucky, Dan Patch, Graham Rye, Old Rampart, Sir John Canada Malt, and Torrance AAA.