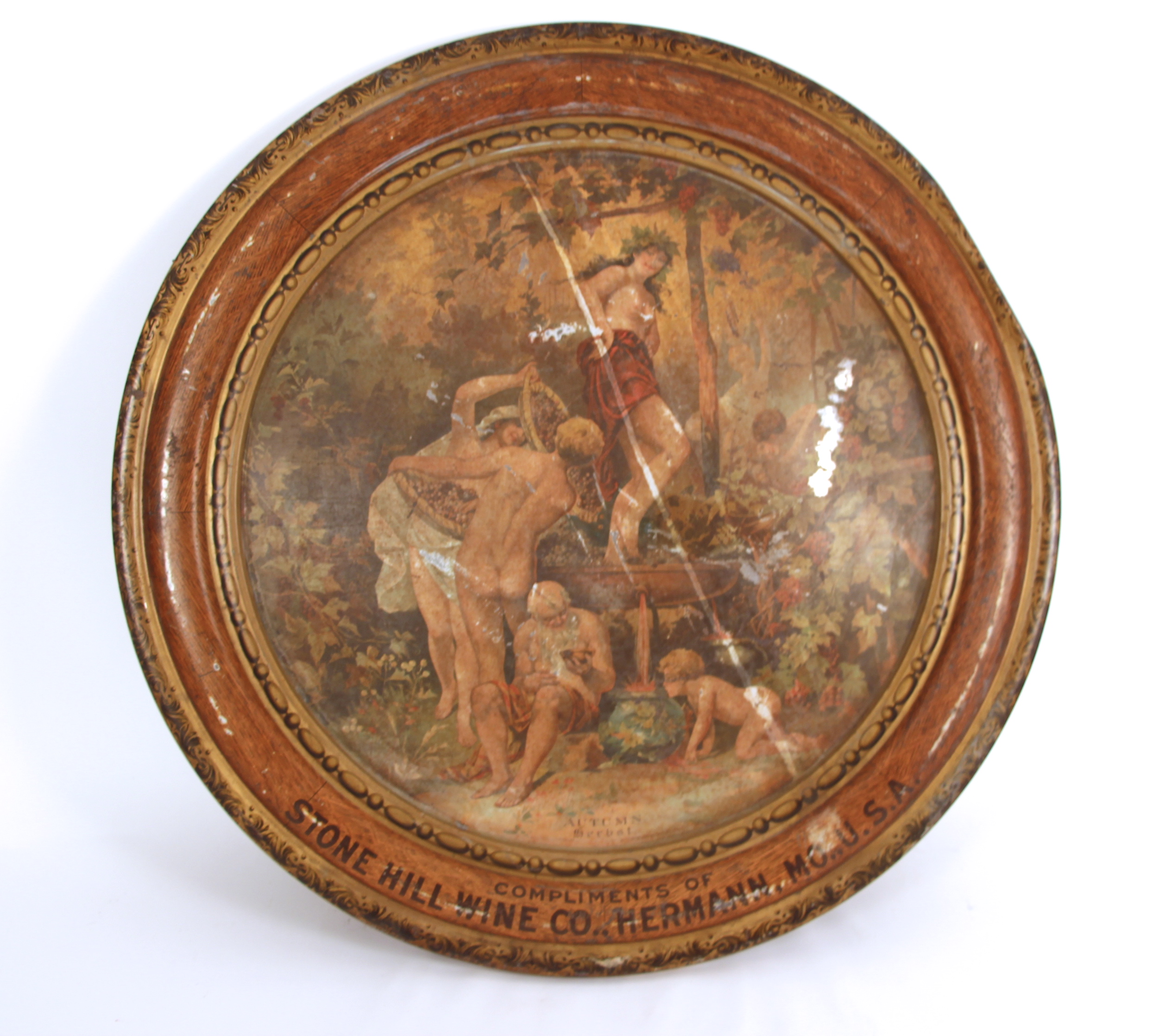 Pictured is a metal charger sign from the Stone Hill Winery Company in Hermann, Missouri.  Circa 1900.   This metal charger has two small holes on the rim area designed to allow it to hang on the walls of a local establishment which was selling their product.   The Stone Hill Winery was once the second largest winery in the United States, and the winery won many awards both in the U.S. and internationally for their wines.   Unfortunately prohibition like many breweries put a halt to the business and when it resumed 14 years later times had changed.    The winery sat vacant for years, but was brought  back to life in the 1960’s and remains a strong hold in the Midwestern area in wine production.

Featured is a beautiful lithographic print from the Diamond Wine Company in Sandusky, Ohio circa 1900. This print advertises their Sans Pareil and Gold Top Champagne brands and features three Victorian era woman drinking the product

A beautiful metal advertising sign with embossed bottles and grapes from the ToKalon Winery in Oakville, CA. This is now part of the Robert Mondavi Winery in Napa Valley. The one bottle is dated 1884 reflecting an award the brand won that year.

A beautiful self-framed tin sign from the Cooks Imperial Champagne Company, which was based in St. Louis, MO before Prohibition.   At one time Cooks Imperial Champagne was the largest selling champagne brand in the United States.   This is also at a time when champagne sales rivaled wine sales in the United States.   This self framed…

This is a beautiful lithographic poster from the M. Hommel Champagne and Wine Company in Sandusky, Ohio. Circa 1900

This is a serving tray from the Cooks Imperial Brands of Wine and Champagne, manufactured by the American Wine Company in St. Louis, MO, 1902.

This is a Virginia Dare Wine serving tray from the Garrett Company based in Saint Louis, MO and Norfolk, Virginia, 1925.

This is a rare serving tray from The Great Western Wine Company based in St. Louis, MO, 1898 featuring Admiral George Dewey.

Circa 1900 Self Framed Tin Metal Sign from the American Wine Company in Saint Louis featuring a beautiful lady and the Cook’s Imperial Brand of Champagne which was their flagship brand at the time. This is a super rare sign, and the only one I have ever seen. A great example of a self-framed sign.

American Wine Company Wooden Self-Framed Box Sign. This is a very rare sign, and was probably displayed in the office of the American Wine Company. This was too expensive to be placed just anywhere. Saint Louis, MO based company with a large regional distribution at that time. Ca 1905.

This is a Pre-Prohibition Reverse-on-Glass (ROG) Sign manufactured by the Stark Missouri Wines Company in St. Louis, MO, circa 1910.