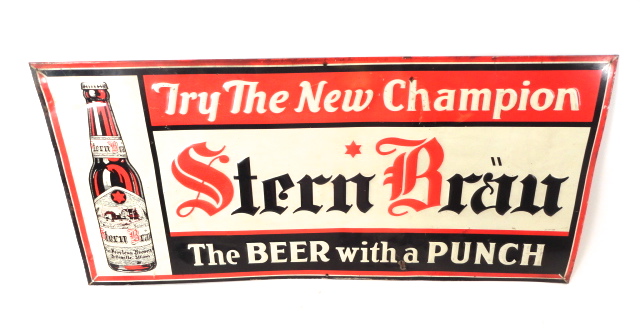 This is a rare Stern Brau Beer sign made by the Star-Peerless Brewery in Belleville, Illinois, 1935.  The Stern Brau brand was their flagship beer. This sign depicts an image of a paper label beer bottle on the left. On the right, it reads “Try The New Champion Stern Brau, The BEER with a PUNCH”.  The Star-Peerless Brewery produced two other versions of this sign. One sign was in a predominantly yellow background and the other one with a green background.

The Stern Brau brand was discontinued in the late 1940’s. Stern Brau was a major competitor to the Stag Brand in Belleville brewed by the Griesedieck Western Brewery Company.