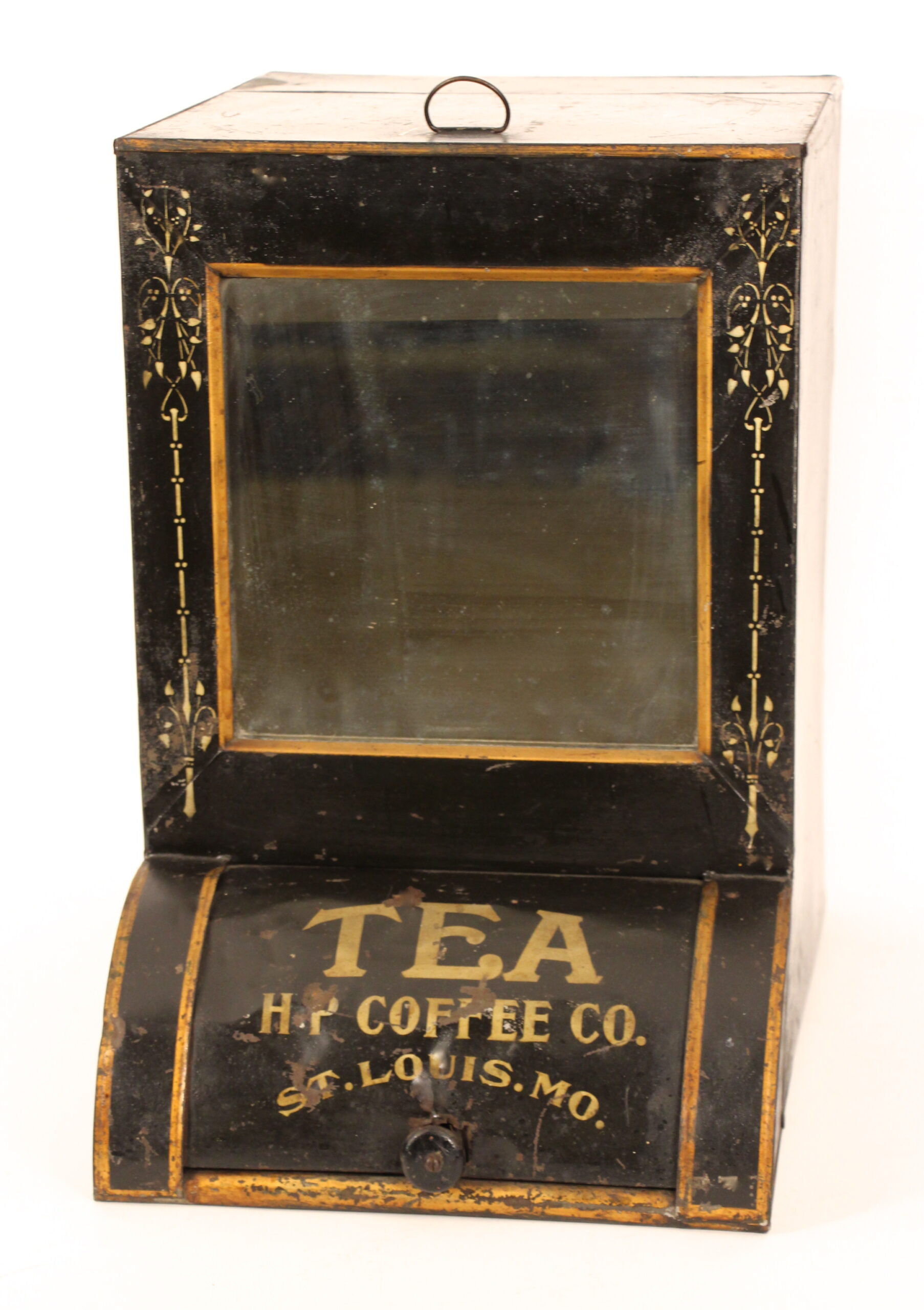 This is a rare general store tea bin from the H. P. Coffee Company based in St. Louis, MO.   Circa 1905.   What makes this bin special is the beveled mirror on the front side. Most vintage coffee and tea bins have a lithograph advertisement on the front instead of the mirror. I believe the mirror was most likely a way to attract customers’ attention with people’s reflections. This is a creative concept for that time period and makes for an interesting vintage advertising piece.

This extremely rare tea bin was manufactured for the H.P. Coffee Company in St. Louis, MO circa 1905. In the early 1900’s, customers would scoop out tea or coffee by the pound from these types of metal bins. Today, vintage general store metal coffee bins and display cabinets are highly coveted by antique advertising collectors.

Peter Heinrich (Henry) Petring started the H.P. Coffee Company in downtown St. Louis in the mid-1800’s. Henry was originally a wholesale grocer for over 25 years when he founded his first company, the Henry Petring Grocery Company.  He eventually transitioned it to a specialty coffee business called the H.P. Coffee Company that was a huge success. It became a family business later run by Henry’s son (George ‘Henry’) and Henry’s grandson (‘William’ Henry). Their flagship brand was Trumpet, known for Trumpet Coffee, Trumpet Spices, and Trumpet Castor Oil.  Another well-liked brand was called Kake Kan Koffee. Kake Kan Koffee was packaged in an unusual coffee tin only 3 ¾” tall and was intended to be reused  to store a  cake after the coffee was empty. By the 1960’s, the popularity of the Trumpet brand and their other coffees were fading, and they eventually went out of business.

In its heyday, The H.P. Coffee Company was one of more than 85 coffee roasters in the St. Louis marketplace. By the late 1800’s, St. Louis was the largest coffee hub of the world because it was the “Gateway to the West” for transporting coffee and many other products. The unroasted coffee beans were hauled from New Orleans by steamboat up the Mississippi River to St. Louis. After the beans were roasted in St. Louis, the coffee made it’s way to the west by wagon, train, stagecoach, and steamboat.