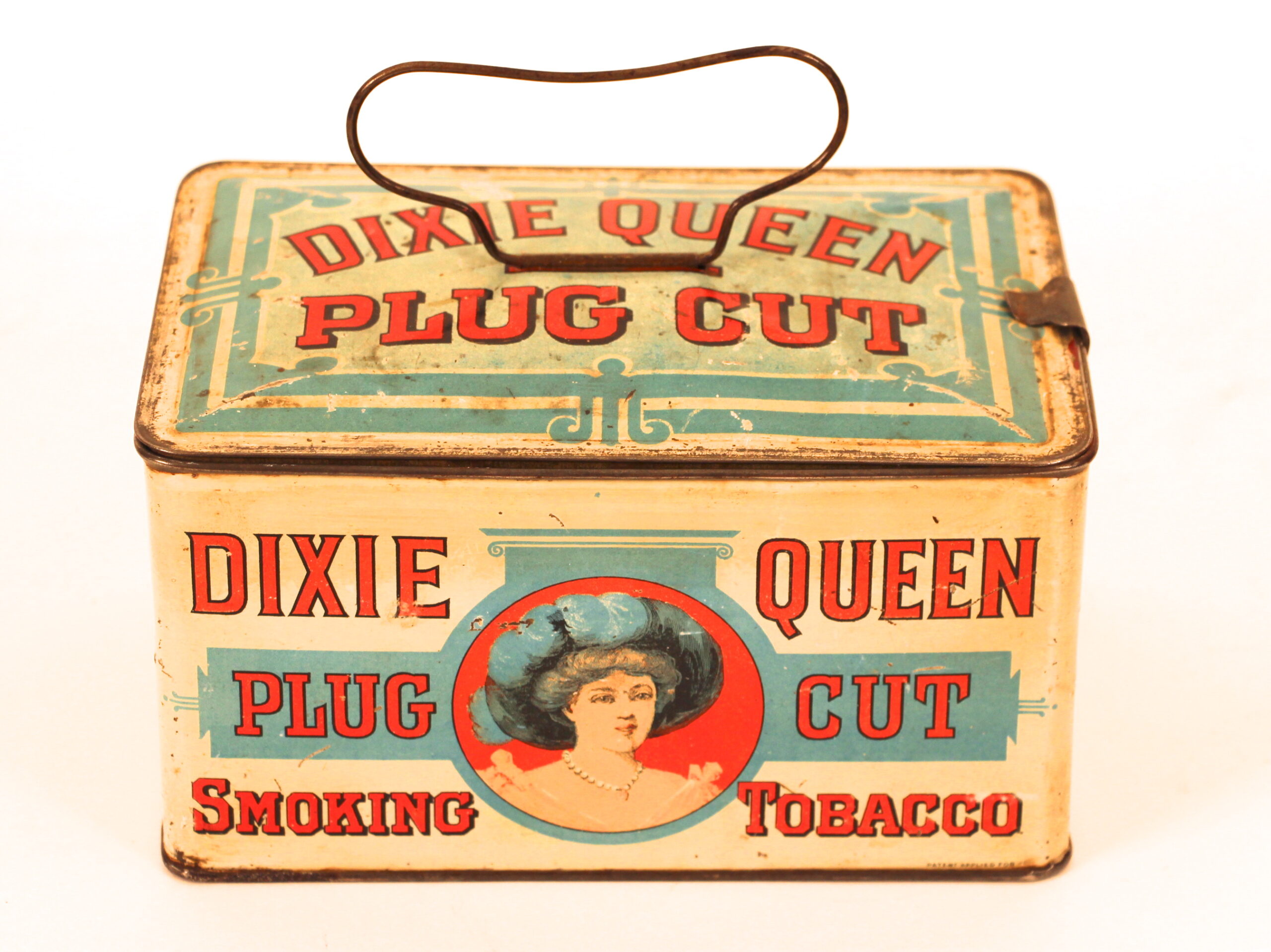 The Dixie Queen Cut Plug tobacco lunch box tin was used by children to take their lunches to school in the late 1800’s to early 1900’s.  They marched off to school hauling their tobacco lunch pails made out of a colorful tin that had convenient wire handles on the top for carrying. This Dixie Queen lunch box tin represents a very colorful box with great eye appeal, featuring a Victorian Queen figure as their logo.  Their is a similar brand to this called Dixie Kid which has a young African American child featured on the tin.

Overall, smoking tobacco lunch box tins are highly sought after and offer a unique history. Many men carried their lunches to work in these metal tobacco tins. It was actually considered a clue that the family didn’t have enough money to purchase a hot meal. In spite of that, school-aged children wanted to mimic their fathers and used the same lunch caddies made from their pop’s old tobacco tins. Interestingly, the neighborhood general stores didn’t really care for the lunch box style tobacco tins because they were difficult to stack on shelves due to the wire handles. The tobacco lunch box tins were adorned with a company’s logo and artwork that stated slogans such as ”Sensation Smoking Tobacco” and “ Cut Plug Smoking or Chew” and “Sweet Mist Taste Great”.

Here is a neat old tobacco tin from a long defunct tobacco cigar manufacturing company which was based in Saint Louis, Missouri in the early 1900’s. Due to the long length of names from the three owners, the brand was simply shortened to B.M.R. Obviously it was easier to ask for an abbreviated name cigar,…

Featured here is a beautiful lithographic print framed for the La Preferencia brand of cigars.  This particular lithograph has a great slogan which says “30 minutes in Havana”.   Clearly this refers to a great 30 minute smoke in Havana with a Cuban cigar!!   This sign was made back before there was a moratorium for Cuban…

Featured is a beautiful tobacco tin lunch box from the American Tobacco Company which was based in Chicago, Illinois.  This tin features a bright image of a fashionably dressed woman and man on their way to some exotic destination most likely.   This brand was one of the companies major sellers along with the Miners Extra…

Here’s an amazing reverse on glass sign for the General Arthur brand of ten cents cigars.   Look closely, and you might recognize the image of the man, it is President Chester Arthur, 21st President of the United States.   Using historical or well known political figures to help sell products was a practice alive and well…

The Saint Bruno Standard Dark Flake Smoking Tobacco was a large seller for years, and still was in business as late as the 1970’s being sold in tobacco shops all around the European area as well as inside the United States.  This particular metal sign is very colorful, and certainly would have garnered the attention…

Featured here is a great image of the Old Virginia minstrel or quartet dance stage group.  These characters are dressed for a play, and are surely characters in the play given their unusual dress or costumes.  The Old Virginia Brand was one of the biggest selling tobacco brands for most of the 20th century era.

Featured is a beautiful round tobacco tin can from the John Weisert Tobacco Company which was based in Saint Louis, Missouri.  This can illustrates the Checkers Brand of tobacco, which was one of many brands the company made for years.  This particular can is from about 1930.

The Baxter Cigar brand certainly played their Drum Cigar brand well, as they created a advertising slogan saying they beat all.   What a better connotation of beating your competitors with a drum?    Certainly some early Madison Avenue Marketer developed the campaign which made sense.   However, the Baxter Drum Brand is no longer with us. …

Featured is a beautiful small tin sign from the Royal Fruit Cigar brand.  The sign advertises their brand as being 5 cts. per cigar.  This sign is from the 1900-1910 era.

Featured is a beautiful general store tin shelf cannister from the Ojibwa brand of tobacco.  Ojibwa was one of the larger selling tobacco cut plug brands sold by the Scott Dillon Tobacco Company, which was based in Detroit, Michigan.  This can is circa 1920, and would have held 48 individual sale packets of their fine…

Here’s a beautiful self-framed tin sign depicting the first mayor of Albany, New York, Peter Schuyler.   He must have been so popular the G.W. Van Slyke & Horton Cigar Manufacturing Company in Albany made a cigar and named it after the cities former mayor.   This sign is spectacular in color and clarity.