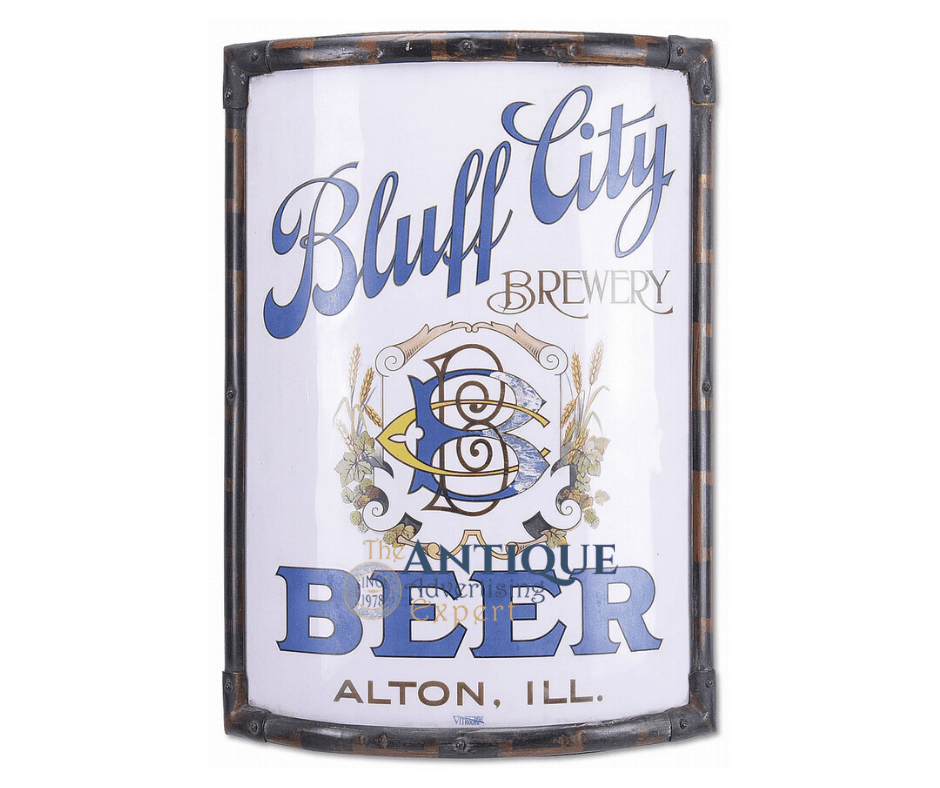 This Bluff City Brewery Vitrolite corner sign was made by Bluff City Brewery based in Alton, Illinois circa 1915. The sign’s illustration includes blue, gold and green colors on a cream background. The image highlights the name Bluff City Brewery and the center of the design features the initials BCB for its company name. On each side of the sign’s artwork are a couple sprigs of barley and hop cones. This corner sign is lighted providing illumination and better visibility when hung outside.

This sign measures 23 inches high by 17 inches wide. There is a metal one-inch frame around the outer edge. The backside of the sign has a frame shaped at a 90-degree angle designed to hang on the corner of an outdoor saloon. The front side of the sign is curve-shaped and enabled it to fit even more snug around a building.

The glass for this sign is made of Vitrolite. Vitrolite was an opaque pigmented glass made in the early 1900’s. It was especially designed for ornamental finishes on surfaces that were exposed to the weather to retain its finish. Vitrolite advertising signs were popular during the Pre-Prohibition era. The Vitrolite trademark is on the front of this Bluff City Brewery sign near the bottom, as commonly found on these types of signs.

The Bluff City Brewery was located in Alton, Illinois within Madison County that is part of the St. Louis Metropolitan area. It was in business from 1881 through 1952. William (Wilhelm) Netzhammer purchased the brewery in 1883. Netzhammer was the son of a brewer and he worked as a brew master and brewery foreman for several breweries before heading to Alton, Illinois with an opportunity to run his own brewery.

Brewery corner signs were placed outside local saloons and were popular in the late 1800’s and early 1900’s. The backside of the corner signs were shaped with a 90-degree angle frame designed to fit on the edge of a building, usually where two walls would meet.  These semi-permanent outdoor signs were often positioned in pairs across from each other on opposite corners of the front of the business.  Many of the corner signs were curve-shaped and allowed them to fit even more snug around the buildings.

Today, corner signs are typically difficult to locate because most did not survive due to glass breakage or the metal being used in another manner. The metal drives during World War II recycled metal from signs to help build mortar shells, tanks and other materials for the war effort.  Corner signs are considered rare and valuable and are sought after by many antique advertising collectors.