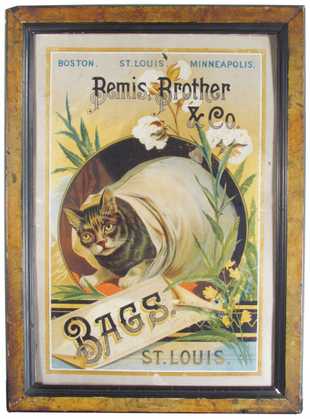 Shown here is an early tin sign from the Bemis Brother and Company plant which was originally based in St. Louis, Missouri.  The company also had plants in Boston, MA and Minneapolis, MN around the time this sign was made around 1900.  Interestingly the use of a cat image in their sign featured here was a common theme for the company.  I would suspect cats certainly chased away any mice which might have fed on the food products which were inside the bags.

The Bemis Inc. was founded by Judson Moss Bemis in 1858 in St. Louis.  They originally started as a producer of printed cotton bags designed to store food products.  The companies claim to fame was the invention of allowing printed advertising to be imprinted onto the bags themselves.   The bags were often hand-strewn at this time.   Over time the company evolved, and today the company remains in business in Neenah, WI and is a worldwide leader in bag production still.

Here is an early salted peanuts tin can from the Amesbury, Massachusetts F. M. Hoyt and Company, which produced the Buffalo Brand of Peanuts.  For early advertising tin collectors, salted peanut cans have always held high esteem and value since there are so few which remain today, and the colorful graphics which were used on…

Shown here is an early 1900’s era tin sign from the Quaker Oats Company, advertising their Quaker Flour, sold in cotton bags.  Quaker Oats had a plant in Canada as shown on the bag.  Known the world over, for every baking purposes, the sign incorporates a colonel quaker gentlemen in the advertisement.

Featured is a beautiful tin or metal sign from the Lipton Tea Brand.   This sign beautifully illustrates a round string holder as it’s image, a common item used to help advertise products in the early 1900’s.

Featured is an incredible gesso framed advertising lithograph from the Charles A. Pillsbury Company in Minneapolis, Minnesota.   This print features their trademark eagle at the time (before the dough boy), and the factory itself in the lower inset view.  Circa 1900.

Featured is a beautiful tin over cardboard sign from the Lipton’s Instant Cocoa Brand.   Circa 1910.

Featured is an early cardboard sign advertising the Hershey Milk Chocolate and Cocoa products.   The Hershey Company was large, but they did limited widespread advertising in the early 1900’s.    Subsequently, collectors today cannot find a large variety of early advertising from this company.

Featured is a colorful tin serving tray advertising the King Arthur Brand of flour which was made in Minnesota in the early 1900’s.

To School Well Fed, Grape-Nuts Self Framed Tin Sign, Circa 1910