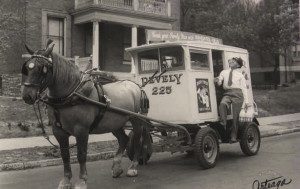 One of the familiar sites in the city of St. Louis years ago was the Pevely Dairy delivery wagon which would go from neighborhood to neighborhood delivering the companies dairy products. On the side of the wagon was advertising for their products.   In many historic photos, it shows the company’s slogan “Baby First” was on their wagons. 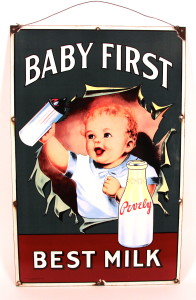 The Pevely Dairy Baby First signs were porcelain with predrilled holes to allow them to be hung easily from the wagon side. Porcelain signs were used for many years starting in the late 1800’s, but the heyday of porcelain advertising was from the 1920’s through the 1950’s. Their Baby First sign started in the 1910’s era but was used for at least 10-15 years. Eventually, the sign was put onto the side of their early delivery trucks. 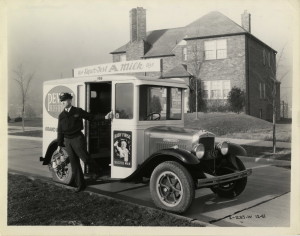 The Pevely Dairy founder, Kasper Kerckhoff , started what was to become the Pevely Dairy when he purchased 485 acres of farmland near the present day city of Pevely, MO in 1887. Mr. Kerckhoff claimed to have the first registered herd of Jersey Dairy cows west of the Mississippi River.

Over time, the dairy business outgrew the original vision he had as a cattle rancher in the small town of Pevely and he moved the growing company to the city of St. Louis, MO. The Pevely Dairy business would grow even larger into one of the biggest dairy companies in the Midwest.   The Pevely Dairy remained one of the largest independent dairies in the U.S. until it was sold to Prairie Farms Corporation in 1989.

The Pevely Dairy plant was located at the intersection of 1001 South Grand Boulevard and 3626 Chouteau Avenue. It remained there until most of the complex was demolished in 2012 by St. Louis University, which plans to build a new Medical School on the former factory site.  When the site was demolished, the well-known St. Louis landmark Pevely Dairy smokestack with the white glazed brick dairy name was removed also, leaving only a memory in many locals’ minds.