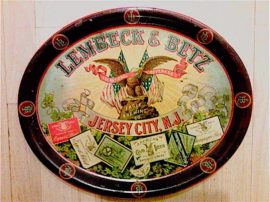 I love this particular brewery tray from The Lembeck and Betz Eagle Brewing Company because of the trays patriotic look.   The bold illustration of an eagle and the claim calling themselves “The National Beverage” along with naming their beer “American Club Beer” simply exudes patriotism at its finest.  I believe in a time of civil unrest with the Spanish-American War having just ended the company simply took advantage of the movement of the time and desire for Americans to be proud Americans.   Is there a better way to communicate this message besides incorporating an eagle and a name like American Club beer to help push national pride?   I am not so sure.

The Lembeck and Betz Eagle Brewing Company was founded in 1869 by Henry B. Lembeck and John F. Betz in Jersey City, N.J. The brewery, bounded by 9th, 10th, Grove, and Henderson streets in downtown Jersey City, developed into one of the most famous, best-equipped, and financially successful breweries on the east coast.  In 1889, Lembeck started producing both pale ale and lager styles of beer.  The brewery grew through the later part of the 19th century, eventually occupying seventeen city lots,  By the time the company was incorporated in May 1890, the brewery had grown to become the fourth-largest brewery in New Jersey.

When Mr. Lembeck died in 1904 his sons Gustav and Otto took over running the brewery. Like so many other breweries of this period, the brewery officially closed once Prohibition started. The facility was eventually sold and converted into a refrigeration plant.  However, once it was vacant, the brewery buildings were demolished in 1997.