THE L. MICHEL BREWERY WAS ONCE A BROOKLYN GIANT! 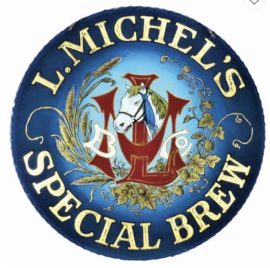 Featured is a beautiful Reverse on Glass sign from the Leonhard Michel Brewing Company which was based in NYC prior to Prohibition. This Reverse on Glass round sign features a stunning mixture of royal blue, gold and maroon red coloring. The sign advertises the breweries Special Brew brand of beer. Special Brew was a very common name given to many breweries in the Pre-Pro era, designed to help give the brewery product a special emphasis on a particular brand they were selling

The Leonhard Michel Brewery was located in the Gowanus section of Brooklyn, the borough right outside Manhattan Island in NYC. This brewery was located on Bond Street, however, as with many breweries, the brewery ceased operations in 1919 with the start of prohibition. Leonhard Michel died in 1926, and the brewery was later bought by Samuel Rubel who worked his ice company operations in the former seven story Michel Building. However, when prohibition ended in 1933, Mr. Rubel steered his brewing interest away from the Michel building to the more established Ebling Brewery. Today, the Ebling brewery is long gone, having been torn down in the 1940’s, but the Michel Brewery still stands strong. It is vacant however as of today.