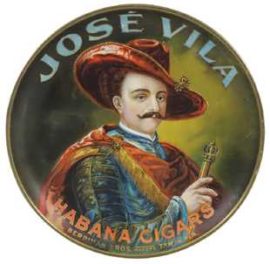 Featured is an early metal charger sign from the Berriman Brothers Cigar Company which was based in Tampa, FL in the early 1900’s.    Their flagship brand based on the advertising I can find was the Jose Vila brand.   This particular charger shows Jose in his Spanish garb, or uniform, dressed to the nines.  Of course, the charger sign clearly illustrates the fact the cigars are from Habana, a version of a Cuban Cigar.    Interestingly, while Jose Vila was not as famous as his counterpart Pancho Villa, there was a clear use of legendary spanish hero’s which were used to help tobacco related products.  One can only assume these Mexican figures were prolific users of cigars given their image use on cigar related advertising products at that time.

The Berriman Bros choice of a metal charger sign was a good choice at the time. Many early saloons or taverns and hotels used these decorative displays to adorn their walls, and due to their heavy construct, they lasted for years.  As a result, many charger signs found today are still in pretty good condition.   The Chas. Shonk Tin Sign Company out of Chicago, IL made this particular Jose Vila charger sign around 1900.