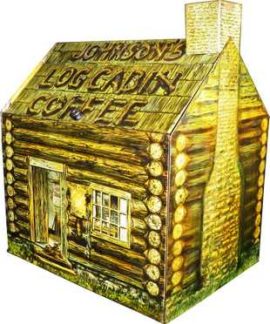 The Log Cabin brand tin general store coffee bin featured here has always been one that fascinated me, simply because of the detail of the tin itself.   The Johnson-Layne Coffee Company went all out when they designed this store bin, finely detailing the look of a primitive log cabin, complete with a detachable brick chimney.   The outside of the cabin has a beaver pelt on the side of the cabin, hanging out to dry.   This truly represents a glimpse into just how the United States looked in the mid-1800’s in the rural areas outside the fledgling cities at that time.

The Log Cabin brand was perhaps the biggest selling coffee brand produced by the Johnson-Layne Coffee Company, which was based in Saint Louis, Missouri in the early 1900’s when this bin was made.   Originally called the Johnson Coffee Company, there was a merger around 1890 which later formed the Johnson-Layne Company.  This particular store bin has a hinged lid on the top, whereby a consumer would simply use a scoop to pull out the desired amount of coffee beans to take home.  At the time this was being used, coffee was sold in bulk, and the consumers would go home and use coffee grinders to grind the beans down to a usable ground.  Due to unsanitary conditions of consumers putting their hands in the coffee bins, the government put these types of bins in the stores into obscurity as the press of the day openly discussed the risk of contamination with these bins.   At that time smaller cans became the preferred delivery of the coffee to the end user.