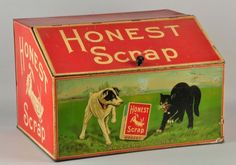 Everyone has heard the old adage, “they fight like cats and dogs” in their lives more than once.   The Honest Scrap Tobacco brand made a worldwide brand famous by using that very image, a cat and dog getting ready to rumble, or, preparing for “An Honest Scrap” as their slogan stated. However, in the case of Honest Scrap Plug Tobacco, the cat and dog are preparing to fight over the tobacco itself!   What a clever image, one which certainly could convey the thought of many tobacco users fighting to get the last package of Honest Scrap tobacco on the general store shelf.  This particular tin counter display bin would have been used to sell multiple packets of individually sealed tobacco to the store’s patrons.   Today counter display tins which are often rectangular or round barrel like tin containers are highly collected by both tobacco enthusiast and general store collectors worldwide.

The Honest Scrap Tobacco brand was manufactured by the W Duke and Sons Tobacco Company out of Durham, N.C.  The brand was started in the late 1800’s and was sold until the 1950’s, always maintaining their famous dog and cat fight scene.