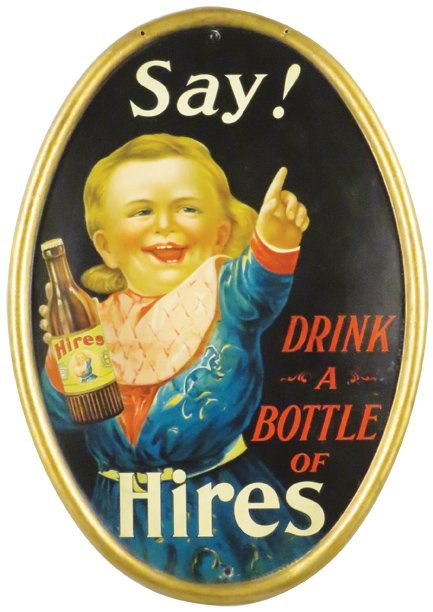 I find it interesting today to learn how the Charles Hire Root Beer Company cleverly used a long standing marketing strategy of showing healthy children to sell their soda brand.   The Hires Root beer brand was marketed as creating “strength, a rosy complexion, and beauty, while supplying the nerves and brain with a blood purifier”.   The Hires Root Beer brand even went so far as to say drinking the soda would increase mental and physical strength!

One of my favorite advertising images is the young boy who was used on many Hires advertising items to help perpetuate their story.   The young boy is typically holding a finger up while smiling cheerfully with a bottle of Hires Root Beer in his hand.   This particular self-framed tin sign is an oval bead edge style, and has a paper labeled bottle in clear view within the image.   The bottle is amber in color, which was a unique way for most soda bottlers in the early 1900’s to differentiate their product from other flavors, including the competing cola brands.

This sign is very colorful and uses the verbiage “Say! Drink a Bottle of Hires”, while most advertising with the boy simply states “Drink Hires Root Beer”, “Better Health and Cheer” or “Mama, could I have another glass of Hires Root Beer”. Oval self-framed tin signs were commonly used in the late 1890s and into the early 1900’s, but they fell out of favor for some reason by around 1915.  Most advertising you will find after that time period is either round, rectangular, or square.   The companies which produced these oval signs either did not offer them as an option, or more likely, they were more expensive to produce, and hence, fell out of interest as a cost saving factor vs. other signs, since these were all giveaways designed to help sell their products.

DEMISE OF THE BRAND:

While the Charles Hires Company rose to prominence and was the number one selling brand of root beer in the U.S. for years, their quick demise is startling to me.   The Hires Company was in private family hands until 1960 and sales were still doing very well when the brand started moving through a series of corporate mergers and new ownership.   By 1989 the Cadbury Schweppes Company owned the brand and quickly moved their advertising dollars into other their other soda brands, starting a quick decline in sales for Hires Root Beer.  By the time the company divested the brand to Dr. Pepper Snapple about 10 years later, the brand was being phased out because Dr. Pepper Snapples was more interested in promoting the A&W brand of root beer which they already owned.

Today it is very difficult to find the product on a store shelf in the United States, although their are some limited markets primarily in the Southeastern part of the country still.  The decision to withdraw marketing efforts for the brand is sad considering how well the brand sold not too long ago.  However, the Hires image and the vast array of advertising the company produced over the last 100 years keeps collectors happy in their pursuit of the next Hires Root Beer piece to add to their collection!