EVERYONE NEEDS A LITTLE MOXIE IN THEIR STEP! 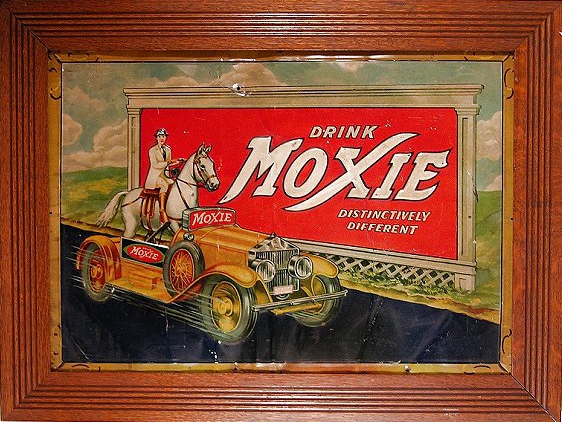 The Moxie brand of soda was a very well-known soda brand which had a huge following in the Northeastern part of the United States for many years.   This 1933 tin sign incorporated their commonly used slogan “distinctively different” in the advertisement.     The use of the racing car was also something that collectors can find on several different Moxie era advertising pieces of this era.   This particular sign is in a frame which is not original to the piece however.   Most of these signs were simply designed to be mailed onto a wall somewhere, and were generally hung for what was expected to be a short duration of just a few years at most.

In the latter half of the 1800’s the era of patent medicines became a very popular invention for many early druggist throughout the U.S.   There were so many different brands that many of their claims were more outrageous than the next competitor.   One of the earliest patent medicines originated out of Lowell, MA and was founded by Dr. Augustin Thompson.     Dr. Thompson eventually patented his fast growing product in 1885 under the tradename Moxie Nerve Food.   Dr. Thompson’s claim for Moxie was that it did not include any alcohol, poison, or medicine.   As such, the lack of a medicinal tie helped launch the opportunity for Moxie to enter the soft drink market.

The Moxie brand quickly secured a following and the reputation as an amazing nerve food. Proponents claimed it cured them of all of their ailments almost immediately. The word moxie quickly became a slogan for people who had a little extra pep in their step. Everyone wanted to be known to have a little moxie in their attitude or disposition.   However, what really created the medicinal benefit to provide the boost in energy? Moxie was simply developed from a special type of herb root which originated from South America. As the claims of the benefits of Moxie grew, many fountain drink owners quickly added Moxie to their offerings, and the Moxie brand took off like a rocket. By the 1940’s Moxie was selling well outside of the New England area and now had plants in Chicago, IL and St. Louis, MO, helping the brand achieve more of a national following.

The Moxie brand used a lot of advertising point of purchase displays to promote their product. Advertising collectors today will find either Boston Red Sox great Ted Williams in many of their ads, while other promotions incorporated the often seen a pharmacist-soda jerk image in their ads.   Advertising propelled the brand very well.   But a change in management and the effects of World War II caused a change in the company’s vision. During this time the company made a decision to stockpile sugar reserves and those costly efforts caused them to pull back on their advertising dollar spend.   The timing could not have been more ill-timed, as their large national competitors started advertising more and more. This combination effect caused the Moxie brand to fall off the radar almost as fast as it had risen onto the scene. Sales dropped dramatically, and the brand never recovered. Today Moxie is still sold in a few regions, most notably in the states of ME, MA, and PA.   Only time will tell if the Moxie brand and its unique flavor ever come back to a more prominent role on the national soft drink scene once again.