EVAPORATED MILK ONCE WAS KING! 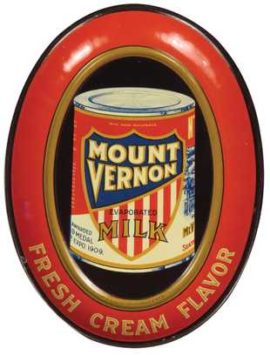 How often do you buy evaporated milk in today’s fresh from the market economy?  Probably not often at all, unless you want some unusual recipe which calls for the product.  But 100 years ago evaporated milk was all the rage, as it could be stored differently in a world where cooling refrigerators were a dream in peoples minds at that time.  The Mount Vernon Evaporated Milk Cream brand was one of the largest selling evaporated creams in the early 1900’s out west.  This particular tip tray shows a nicely labeled can, and makes reference to their gold medal they won at the Seattle Yukon World Fair Exposition in 1909, held in Seattle.

This particular tip tray features bright red coloring, one of advertisers key colors to attract attention to their brands.  As a result, this product was displayed on the can in a nice bold visual, as to ensure people saw the product first.  The main competitor to Mt Vernon Creams was the Highland IL Based Evaporated Cream Company, which later was merged with Pet Milk Company in Saint Louis.  Today the Pet brand still remains the largest selling evaporated milk product, mostly used for baking purposes. No longer do people buy evaporated milk as a dairy substance considering the availability of refrigeration and more milk based products to sell.