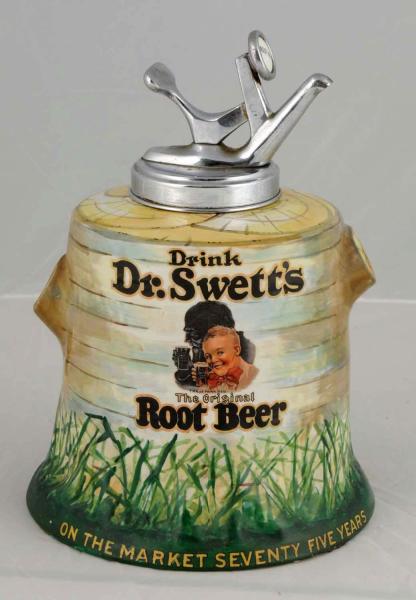 Dr. Swett’s Root Beer was a very well-known New England area soft drink, which achieved great success years ago.  The brand itself started in the mid 1800’s and lasted over 100 years, proving the product has staying power.  I love this particular stoneware syrup dispenser from the Dr. Swett brand.  The dispenser has a notation which says the drink had been “On The Market 75 Years”.  One would think this would help pinpoint the age of the dispenser quite easily.  However, an exact date is not available.  There are no references which date the beginning of this well known brand.   However various sources document Dr. George Swett’s birth year as 1845, which means the dispenser is from 1931 by using simple math and adding 75 years to his birth year and his claim he invented the drink at age 11.   This date also makes sense as the 1930’s era coincides when this style of syrup dispenser was in use at soda fountains and drug stores throughout The United States.   What I like most particularly about this dispenser is the image of the older man with another image of his younger self directly in front of his aged image.   This design undoubtedly is supposed to convey the story of Dr. Swett creating a product as a young boy which has sustained longevity over many years.   Many consumers might automatically think the longevity of a product would be a sign of a quality product.

Dr. Swett advertised his soft drink as “The Original”, and he claimed to have invented his Root Beer when he was only 11 years old.  Is it possible?  Certainly, he may have concocted some sort of drink using various herbs found on the street, but was he a commercial success at age 11?   I suspect not.  However, outlandish advertising claims were not monitored as diligently as they are today, so no one probably blinked at his claim.

Dr. Swett was a very successful businessman.   By the early 1880’s he had two very large pharmacies in both Boston and New York City.  His brands eventually morphed into several flavors, most notably Sarsaparilla, Checkerberries, Juniper and Wintergreen.   His products claimed to have beneficial effects on the stomach, liver and kidneys.  Ironically soda today is often blamed for adverse events on the same organs Dr. Swett claimed benefited from his product 125 years ago.  While Dr. Swett died at the ripe old age of 93 in 1924, his product continued on for many years.   Not a bad business adventure for an 11 year old who had a vision to create a delicious drink which may have had some health benefits too!