Dairy collectibles include milk bottles, bottle caps, milk cans, wooden crates, signs, trays, ice cream containers, clocks and calendars. Milk bottles had the company names embossed or painted on them. The manufacturer’s name was also carved into the early wooden milk crates that carried the product in it.

Dairy signs were made out of cardboard or tin and often featured children or families. By the early 1900’s, advertising messages included how drinking milk was healthy for everyone, such as “Milk Belongs in Every Meal”, “Milk Builds Great Athletes” and “No One Ever Outgrows the Need for Milk”. 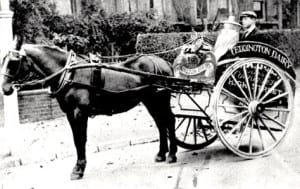 Some of the earliest dairy collectibles are from the small dairies in the late 1800’s that were local. Originally, milk was scooped directly from the farmer’s churn into jugs that customers would leave on their doorsteps. The milk was delivered by horse-drawn carriages. By the early 1900’s, small town dairies were virtually everywhere and the farmers competed against each other as they packaged and sold their milk in bottles that had their names on them.  In the larger cities, dairies competed against both large dairies and the smaller mom-and-pop ones. 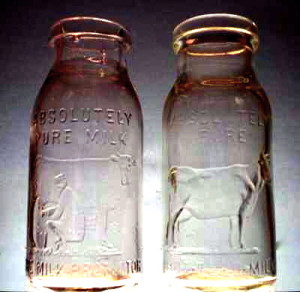 Milk Bottles Created in 1884 by a New York Pharmacist

Inventions such as milk bottles, milking machines, pasteurization equipment and refrigerated tanks helped make milk healthier and easier to get to people in all cities. It’s not known for certain when the first milk bottle was introduced. Crockery type jars were originally used in the late 1870’s. One of the first glass milk bottles was developed in 1884 by a New York pharmacist, Dr. Thatcher. Thatcher’s “Common Sense Milk Bottle” had caps that were sealed with a waxed paper disk and protected the milk from germs. Thatcher realized that the contaminated milk had been causing many juvenile deaths after watching milkmen ride up to homes and dip milk from dirty cans and pour it into customer’s jugs. Thatcher’s milk bottles were embossed with an image of a farmer milking a cow and stated “Absolutely Pure Bottled Milk”. Originals of these are very hard to find and considered valuable. 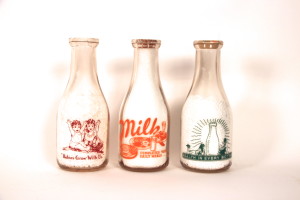 Milk bottles are the biggest overall single category of dairy collectibles. Many antique advertising collectors are interested in the early milk bottles that were used for home deliveries and have embossments or “pyroglazed” paintings with the names of the dairies on them. The dairies wanted their company names on the bottles so they would get returned to them and reused. Milk bottles were mostly round through the 1950’s, then square shape became more popular. Otherwise, bottles tend to look very similar with clear glass and either a short or medium length neck. They also had a rounded collar but not a wide mouth to make pouring easy. The value of the bottles depend on the condition, the size, the dairy, the image and message, and the paint color.

As manufacturers improved making milk bottles they found it was less expensive to change from embossed labels to applied colored labels know as ACL’s. Bottles with ACL’s and ones that used embossed slug plates are often considered valuable. By the 1960’s, glass milk bottles were replaced with paper cartons and plastic milk containers that were less expensive to make but preserved the milk’s freshness.

Today, when collectors want to show their antique milk bottles they are often filled up with white sand or small white styrofoam pellets to make them look like they have milk.