WHO WOULD USE A CHILD’S IMAGE TO SELL BEER? 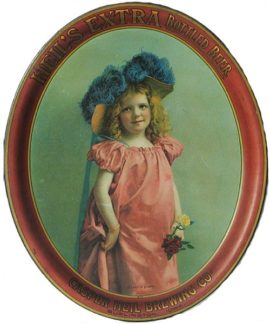 I have always found it quite interesting when breweries utilized images of young children in their advertising to help sell their brands of beer. This practice was very common in the late 1800’s and early 1900’s given the amount of antique advertising still found today with this combination of themes. I don’t believe today the use of children in alcohol advertising would be looked upon very favorably by the FDA or the FTC. But in the 1900 era when Casper Heil’s Brewery in Burlington, IA put out this beautiful serving tray for their Extra brand, the practice was quite common.

The girl on this tray is titled “A Lady of Quality” however, she doesn’t appear to be a lady at all since she appears to be about ten years old in the image itself. The use of kids, angels, cherubs, and animals was a common theme for breweries prior to the start of prohibition. This strategy must have been very successful at the time since it is very easy to find alcohol advertising still today featuring animals of all sorts, including dogs, frogs, horses, and all kinds of child images in advertising giveaways. Let’s face it, who can forget Spuds Mackenzie, the Anheuser Busch Companies Clydesdale horses, Alex, the beer fetching dog from the Stroh’s brand, or the Budweiser Frogs? All of these characters were very successful with their respective ad campaigns.

The Casper Heil Brewing Company was started in 1872 and was in business until 1916 when prohibition went into effect in Iowa. Casper Heil started his brewery by purchasing the Bauer and Schafner Brewery which had been in business since the 1850’s. The brewery stood at 865 Jefferson and the buildings varied in size from one to six flours. At it’s peak, the brewery employed 20 people.