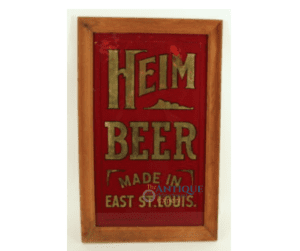 This Reverse-on-Glass Corner Sign is from the Heim Brewery in East St. Louis, Illinois, Circa 1905. The sign’s glass is reverse painted red with brilliant gold lettering outlined in black and reads, “Heim Beer Made in East St. Louis.”

It’s fascinating to see an identical Heim Beer corner sign hanging outside of a small saloon as is shown in a 1908 postcard I found a few years back. I think it’s truly a part of an amazing history to see how the antique breweriana sign was actually utilized in the early 1900’s!

Two brothers owned the Heim Brewery, Ferdinand and Michael Heim. They came to the U.S. from Wolfert, Austria in 1851 and eventually moved to St. Louis in 1857 and quickly established their first brewery in Manchester, MO. The original cave from the first Heim Brewery is located in a small park right alongside the busy Manchester Road today.  The brothers later established a larger Heim Brewery in 1870 in East St. Louis, IL after the brothers bought out the Lincoln Brewery and named it after themselves.

The Heim Brothers and their Legacies

When the brothers Ferdinand and Michael Heim moved from Manchester, MO to East St. Louis, IL they first started a hotel and saloon called the “Yellow House”. Cattle farmers who visited the hotel on their way to the market also frequented the saloon.

The brothers were motivated by witnessing the high demand for beer and wanted to get back into the brewing business again. Around 1870, they started the Heim Brewery after buying out the Lincoln Brewery. The Heim Brewery was immediately successful, unfortunately their brewery burned down in 1876. So they rebuilt a larger brewery building that stayed open until prohibition put them out of business.

While their East St. Louis, IL location flourished, the Heim family also took their brewing interest to Kansas City, MO and bought into the Bavarian Brewery. Shortly thereafter, the sons of Michael took over the business permanently and the Heim Brewery in Kansas City was established. This brewery also ended with the start of prohibition similar to the East St. Louis operation. The Heim’s were very active in the civic circles in Kansas City and started their own Electric Park.

How Heim’s Built their Empire

Owning saloons in the same markets they sold their beer was a key to the Heim’s brother’s success. In 1913, in East St. Louis there were 351 saloons and taverns listed in the local business directory. A local newspaper reported the Heim’s owned 122 of those saloons. Their crosstown rival, The Central Brewery, owned 116 of the saloons.

The vast majority of these saloons were “closed houses” which meant they typically sold only the beer made by their ownership. By doing this, the local breweries were assured of having a continuous stream of business coming their way. Unfortunately for the Heim’s, the passage of the Volstead Act that started Prohibition, ended the era of the Heim’s family business.