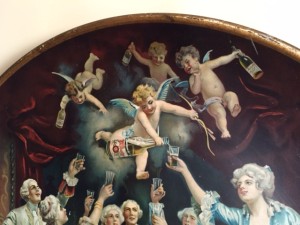 One of my favorite types of historic antique advertising items are when brewers used tiny winged cherubs to help them sell their beer. This was over 100 years ago. It is not uncommon today for an advertising collector to come across various scenes from many breweries showing babies or the cherubs dancing or flying around with bottles of beer in their hands. 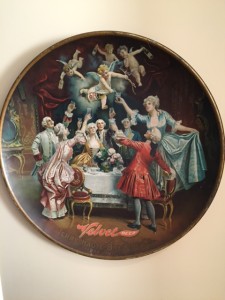 These characters are often serving the beer to whomever is in the center of the scene, sometimes a mother or a person of royalty.   Other characters were also used, as is the case with this advertising charger for Velvet Beer from the Terre Haute Brewing Company I recently added to the collection.   This scene shows either British Royalty or Colonial Americans wearing powdered wigs, or perukes as they were better known, happily waiting their turn for some Velvet Beer.

Collectors of early advertising can also find babies and cherubs on various advertising items including trays, bottles, signs, and large metal chargers as is shown here. 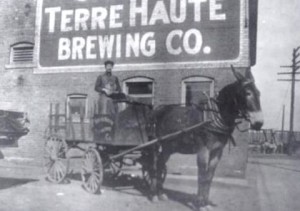 The Terre Haute Brewing company began in 1837 at the location of 8th and Poplar Streets in downtown Terre Haute.  The brewery eventually grew larger in the 1800’s through several acquisitions of competitor breweries in the Terre Haute marketplace.  While the brewery was known for several brands, the flagship brand in the 1900’s was certainly Champagne Velvet, which was introduced in 1904.

The company must have made a large push for this brand, considering the amount of early advertising pieces you can find with the Champagne Velvet name on it.  However, this particular piece must be pre 1904 as it simply advertises the predecessor brand, Velvet Beer.  Other brands the Terre Haute Brewery sold beer under were 76 Ale, America’s Pride, Blackhawk, Radium and after a merger of the Red Top Brewery of Cincinnati, OH in 1957, the brands Red Top, 20 Grand and Barbarossa were also produced in Terre Haute.

Eventually sales started to fall and in the late 1960’s, the brewery ceased production and the Champagne Velvet brand was sold to the Associated Brewing Company.  Today, however, a local microbrewery has brought the Champagne Velvet lager beer brand back into production!   I certainly hope the best for the new business and wish them the best of luck in their vision to bring back a piece of early Indiana brewery history!