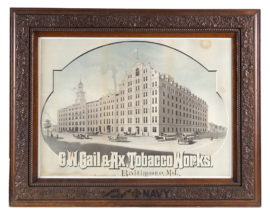 The G. W. Gail & Ax Tobacco Works was famous for their leading brand, Navy Cut Plug Chewing Tobacco.   The enclosed framed factory scene from the Gail and Ax Tobacco Works Company features an impressive image of the massive structure which was located on Pratt and Barre Streets near Charles Street in Baltimore, Maryland.    If you look closely, you will see this print is still in the original frame, with the Navy Brand logo and words “smoke and chew” ingrained inside the bottom of the wood.    The Navy brand of chewing tobacco was started shortly after the Spanish-American War ended in 1898.   Interestingly, competitors brought out similar military themed competitors including the U.S. Marine brand, George Washington, Uncle Sam, and the well-known Union Leader brand.

The G.W. Gail & Ax Company was founded by Mr. George W. Gail in 1850.  By 1855 Mr. Ax had joined the firm as the company was just starting their growth spurt, and already had made an addition to their original building.  With the addition the building was quickly five stories tall as is shown in this illustration.   In the companies heyday the firm employed about 350 skilled tobacco men.

The G. W. Gail & Ax Company produced smoking tobacco, cut plug, chewing tobacco and snuff.  Along with the famous Navy brand, their second largest seller was call “Little Joker”.  Most of their tobacco product was grown in Virginia, North Carolina, Kentucky and Maryland.   The production of tobacco eventually reached over three million pounds of finished product and the Gail & Ax firm helped propel Baltimore to become one of the leading tobacco production cities in the United States.