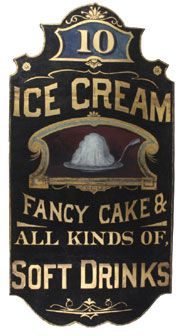 Featured here is an amazing wooden outdoor sign which would have hung proudly outside a late 1800’s confectionary. The use of wood signs in the mid to late 1800’s was the most commonly used advertising mechanism for early business’s. Wood was cheaper than metal at the time, and the German lithographic process was still in it’s infancy. In the late 1800’s the use of metal became more commonplace as large companies in Chicago, Coshocton, Philadelphia and New York started producing many of the early tin or iron signs as they were commonly referred to.
This sign features an image of ice cream in a spoon, but also references other products sold by the business, including cakes, and soft drinks. Undoubtedly this sign hung outside of an early soda fountain/confectioner.
Early wood trade signs are one of the most highly collectable antique advertising items today. Values can fluctuate considerably, however, the factors which help determine the value the most consist of the subject matter, condition, locale insight, and design or shape of the sign itself. Die cut signs tend to be much more expensive than traditional square or rectangular signs for instance. Many wood signs do not have the address of the business on them since they were manufactured in a time period where travel was limited, and most consumers knew the location of the business represented. This was especially true in small town advertising signs. While many of the signs can be identified simply by the name on the sign, or an image to help determine the business type, many of these early signs remain unknown and will for eternity. The featured Ice Cream sign is an example of this circumstance.
Early Americana has always been popular amongst collectors and museums alike. So the next time you see an early wooden trade sign, imagine the craftsmanship necessary for the sign to be made, and the luck in the sign being preserved for 100 years or more!