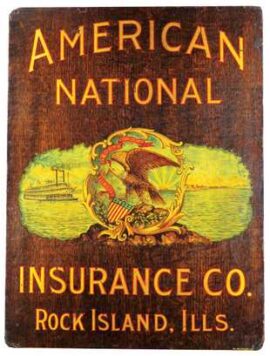 I have always thought this sign was pretty cool, as the name of the company essentially covers both the American and National League divisions of the MLB Major League Baseball professional league. I suspect for baseball fans, the name of this company quickly evokes thoughts of the baseball to many people. This wooden meyercord decal sign proudly emblazons an American Eagle, obviously the logo of the company, and an emblem which favors the United States heritage. I also love the steamship in the background moving along on the lake or an ocean. Meyercord signs were manufactured by the Meyercord Sign Company, formerly based in Chicago, Illinois. This company produces thousands of decal signs in the early 1900’s and well into the 20th century, albeit without the wooden sign component due to rising costs.