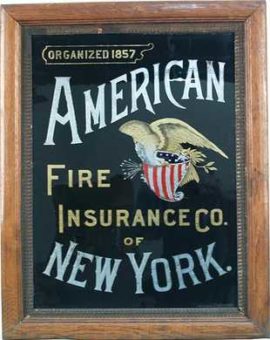 The American Fire Insurance Company boldly used the American Eagle as their symbol to help demonstrate patriotism at it’s finest.   I am not sure why the eagle image was used so often with insurance companies, but the American Fire Insurance Company of New York City was one of many insurers which incorporated this american patriotic symbol into their advertising campaign.  Oftentimes as is the case with this sign, the United States flag was being carried by the eagle in the eagles claws.  This reverse on glass (ROG) sign also includes the companies organization year in 1857, helping to demonstrate long term viability with this companies offerings.

Today it might seem funny to have an insurer which is based solely on fire insurance offerings.  However, given the time period when this company was formed, many buildings were made of wood still, and were very susceptible to fire damage.  Hence, the need for this coverage.   With the advent of more brick buildings around 1900, the business nee for a pure fire insurance company started to diminish accordingly.   The New York based American Fire Insurance Company later merged around 1908 with the United States Fire Insurance Company, and the company remained in business until 1977.