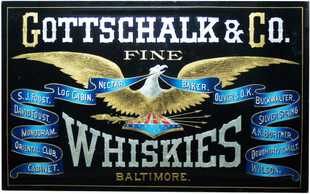 Well before Prohibition the dreams of a German immigrant named Albert Gottschalk started and ended with a true rags to riches theme. The enclosed stunning ROG or Reverse on Glass Sign shows just how many different brands Mr. Gottschalk was selling at his zenith of business around 1900. I love the eagle emblem, truly patriotic in a time when the United States had just ended the Spanish American War in 1898, and Americans were very boastful about their civic pride. One can see many brands on the sign, including Nectar, Silver Springs, Monogram, Oriental Club, Cabinet, and others. However, the Gottschalk and Company flagship brand was their Old Pointer brand, whose image was of all things, a pointer dog! This brand was heavily advertised throughout the Baltimore region, and wherever Gottschalk business was conducted, which was well into the Midwest in their heyday.

Albert Gottschalk arrived in Baltimore around 1855 and while his early years in the United States are somewhat unknown, by 1867 he was already on his way to his fortune as he was in business with a liquor wholesaler business partnership called Gottschalk and Spillman, located at 46-48 Light Avenue in Baltimore. How long this partnership lasted is unknown, but by the mid 1880’s Mr. Gottschalk was already the reigning king of the liquor and wine business in the city, and his business consisted of many brands of distilled spirits and wines. As his business grew, as always does, old age caught up to him and Albert passed on in 1898. Fortunately his son Joseph took over for his father, and ran the business until prohibition stopped all liquor businesses in their tracks. At one time the Gottschalk family married into the Fleishmann family of Cincinnati, OH, creating an even larger conglomerate of family businesses for many years.