A STUNNING STORZ BREWERY BIRD CARRYING AN ELF-LIKE MAN OUT FOR A DELIVERY? Circa 1905 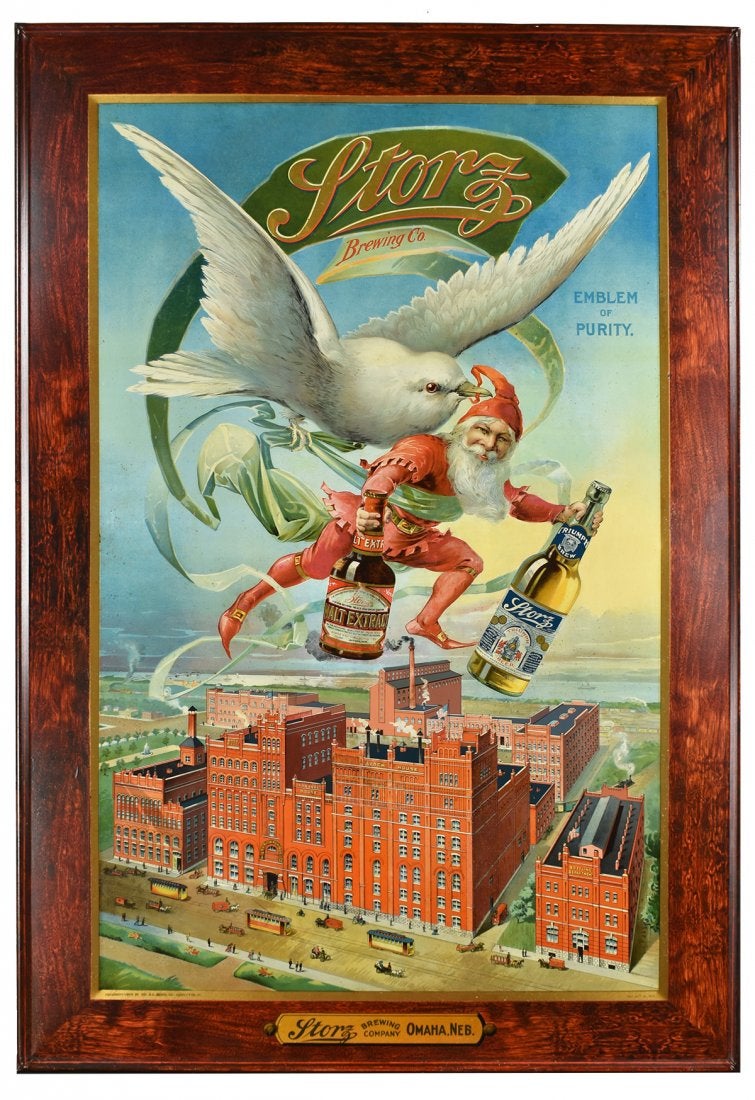 WOWSER! Pictured here is an amazing early pre-prohibition era self-framed tin sign from the Storz Brewing Company, an Omaha, Nebraska icon in the brewery business of yesteryear. This particular image featured a bird carrying a gnome or elf like small man away from the brewery, with two bottles of beer in his hands. Could the man be making a delivery via the bird? The slogan “Emblem of Purity” is broadly included. The image features their Malt Extract and a Lager Beer it appears. I guess it is up to the imagination of the person viewing the image. What great detail! The color is very bright, the image details of the brewery factory building are simply stunning. This sign is certainly a beautiful image to be admired by all who viewing it.

The Storz Brewery was originally called by another name, but in 1884 Gottlieb Storz and J.D. Iler purchased the brewery and renamed it the Storz Brewery. By the early 1900’s the brewery was the largest selling brewery in the state of Nebraska, and one of the largest sellers in the upper Midwest. The brewery reopened after Prohibition ended, and was able to remain in business until 1966 when the contents were finally sold the Grain Belt Brewery out of Minneapolis, MN. In 2013 there was an attempt to resurrect the brand, however, it was short-lived, as the nonpayment of taxes forced the brewery and the Storz brand to be discontinued once again, this time in 2015. Over the years some of their best selling brands were storz Old Tap, Gold Label, Premium and Storz All Grain.