A SPARKING IMAGE BUBBLES LOHR SODA TO THE TOP, 1900 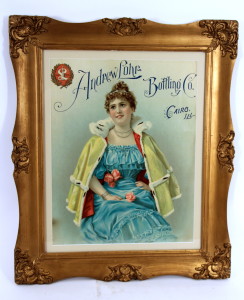 This shining lithograph advertisement was designed for the successful soda manufacturer Andrew Lohr Bottling Company, circa 1900. I found this gem of a piece at a Pennsylvania auction last year. As a historian and collector, I think it’s an ideal example of how soda companies during this era featured Victorian woman in their lithographic advertising.

These types of alluring advertising lithographs caught the eye of patrons while hanging on the walls of stores and shops. In this ad, the woman creates an appeal dressed in her royalty-looking fur cape and tiara while holding a rose. This lithograph is 28 inches tall and 20 inches wide, protected in an ornate gold frame.

The Andrew Lohr Bottling Companies leading soda brand was the White Star Soda Water. I have seen this brand’s advertising dated from the 1860’s through the 1910’s with the name embedded on it. 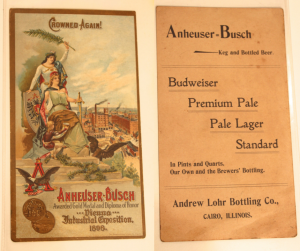 The Andrew Lohr Bottling Co. started in 1861 in the small town of Cairo, Illinois. Andrew Lohr sold his dairy herd and purchased a recently closed soda factory from Edward Schroeder.  A June 1860 business directory shows Mr. Lohr to be an employee of Mr. Schroeder, so the purchase was probably a simple one for Mr. Lohr and his former boss. Interestingly, both men were only 25 years old at the time of the sale. Neither man realized at the time that they would each spend the rest of their lives working in the soda business.  Mr. Schroeder relocated to East St. Louis, IL and became successful with two other soda factories.

In the late 1800’s, The Andrew Lohr Bottling Company was also a regional distributor for Anheuser-Busch products, including Budweiser. An Andrew Lohr Victorian trade card illustrates this on one side while proudly announcing their award at the 1898 Vienna Industrial Exposition. The Anheuser-Busch beer depot was situated next door to the soda manufacturing plant.

Andrew Lohr quickly became a leading businessman in Cairo, Illinois when his business took off. He utilized the convenient location of Cairo, situated on the Ohio and Mississippi Rivers, to transport products in many directions. In fact, during the late Civil War his supply was being shipped to the soldiers fighting for both the North and South causes. Today, current bottle diggers often find his bottles in many cities outside of Cairo, including New Orleans where he must have had a flourishing retail trade. He gained broad appeal quickly and his soda was a big hit!

In the mid to late 1800’s, soda manufacturing was typically a part-time business, as sales generally didn’t do well in the cold weather months. However, The Andrew Lohr Bottling Company remained open year round. Andrew Lohr hired two employees as early as 1870 who were each paid $1,600 a year. In 1870, he produced 5,000 boxes of soda per year that equaled 120,000 individual bottles, quite a volume in that era. In the 1880’s, the business was advertised as having “a wide market to supply in Illinois and other surrounding states”. The earliest Lohr soda bottles are actually stoneware in composition, and were made by Noah Ailiff, a local potter in Mound City, Illinois.   Soon after that, The Andrew Lohr Bottling Company produced their soda in glass bottles.

In the late 1890’s, Andrew Lohr started selling a brand of Temperance or non-alcoholic drinks. The Temperance movement against alcoholic beverages was already starting and Mr. Lohr had the insight to grab a piece of this market while the movement was strong.