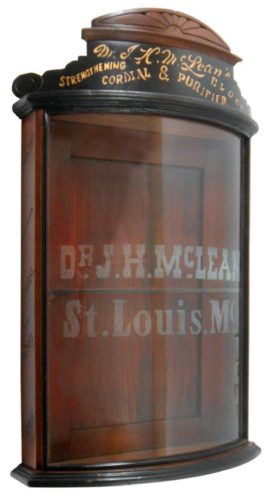 I was very happy to recently acquire an early general store wood cabinet with gorgeous etching on the front glass from Dr. J. H. McLean’s Medicinal Empire in St. Louis, MO.   This cabinet would have been filled with bottles of Dr. McLeans Medicines and been on display in an early store.   I believe this cabinet is from the 1890’s, which was well into the years of Dr. McLean’s business empire.  The backside of the cabinet has an old latch to close the door after the shop owner would replace the display bottles inside the cabinet.   The etching on the glass is an early acid-etch style of lettering, common in the late 1800’s and early 1900’s.

Dr. McLean’s factory was originally located at 314 Chestnut Street in downtown St. Louis. This location would remain the headquarters until a fire destroyed the building in 1883.  At that time the company built a new factory on the S.E. corner of Broadway and Biddle Streets in St. Louis, MO.  This new factory was known as the McLean Tower Block, which was aptly nicknamed due to the large tower on the top of the new office building.  This building was often photographed and was a famous landmark in the city for years.  Unfortunately, Dr. McLean died in 1886 shortly after the Tower Block was built but his sons remained to run the business.   The business would remain in St. Louis until it was dissolved in the early 1970s after more than 100 years of a very successful run!

James Henry McLeod arrived in Philadelphia as a young boy and worked for a pharmacist in that city at an early age.   Even though he called himself a doctor, educational records from Dr. McLean indicate he only took one medical course while he was in Philadelphia. However, upon his arrival in St. Louis in 1849 he was calling himself a doctor already.   By 1854-1855 Dr. McLean was connected with an early quack medicine called Mexican Mustang Liniment.   He must have been successful because just a few short years later at the end of the Civil War he was producing his own medicines including his Celebrated Strengthening Cordial and Blood Purifier.   Other products Dr. McLean produced include Liver and Kidney Balm, Catarrh Snuff, Tar Wine Lung Balm, and a Volcanic Oil Liniment, among other therapies.   The Strengthening Cordial was reportedly 85-100 proof alcohol and the Volcanic Oil Liniment was crude petroleum.   No matter which product he was selling, his pills and elixers were known to relieve stress, headaches, muscle aches, liver, kidney and stomach diseases of all kinds.   I guess a little alcohol or petroleum in your products can cure just about everything that ails a human being if necessary!

Dr. McLean was also involved in many different endeavors including becoming a member of Congress and securing patents on many different mechanical devices from countries worldwide. All in all, Dr. McLean left quite a legacy and his business successes have left todays advertising collectors quite a bit of items to choose from in the medical, pharmaceutical and general store lines.    This cabinet is one example of his lasting mark from an amazing business in its day.