The Excelsior Brewing Company in South St. Louis produced some fabulous advertising pieces in the early 1900’s.    Many of the companies giveaways at that time incorporated a knight logo into various items including enameled beer glasses, tip trays, beer bottle labels and posters.   The knight logo is always holding a flag in his hands which proudly proclaims their Pilsener Brand of beer in the design. 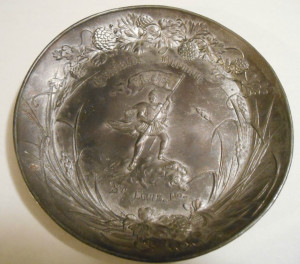 Pictured here is one of their pewter coin tip trays which were commonly used in saloons before prohibition as a way for their customers to keep their change readily available.   This was in a time where a beer would cost 5 cents a glass, and the consumer would keep coins readily available for their next purchase.   Unfortunately like so many other breweries, the Excelsior Brewery did not survive once prohibition started in 1920.  In fact, over 50% of the breweries which closed during prohibition were never reopened, ending an era for many small brewers.   Interestingly, the craft brewers today are once again putting the small breweries back on the map.  Perhaps someone will renew the Excelsior label in the future!

Also pictured are a rare milk like substance shell beer glass from around 1900, and a beer bottle label from their top selling Red Feather brand of beer 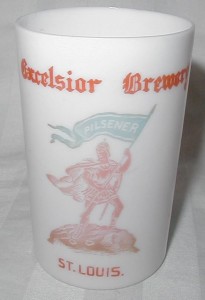